Finished up my year long Torchhbearer campaign (with cake)

I finished up the Torchbearer Campaign last night. It was a big epic world saving finale. Everyone survived. A bunch of the characters lost Nature Descriptors and Trait slots, forever changing them.

See the stats and trivia here. As a club game we had frequent guest and an ensemble cast of the iconics and replacements as they got claimed or killed.

The players were so grateful for the game that they made a Torchbearer cake! 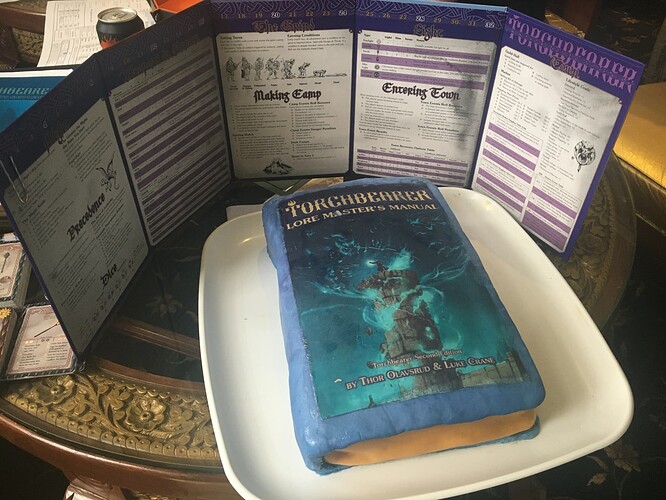 That spreadsheet tells quite the tale. The campaign sounds epic.

With such a large and rotating cast did you take a West Marches approach?

It started off that way. People would show up, grab a character and play. The trouble was that people kept coming back until I had a party that was too big. At this point we discussed what we would do and I asked whether to carry on or have everybody act conscious of an ending by September. We opted for an ending, and limiting to existing players.

Neat. I also see that you ran a lot of adventures that completed in a single session, which I only note because my players often have a tendency to slow play things. Was there something you or the players were doing to push the pace? Or was that just the rhythm you all naturally adopted?

I do push the pace. I identify the key conflict and hone in on that. I erred on the side of simple tests for non-violent resolution.

Thinking back to House of the Three Squires (which I know can take much longer), the party spent time with the granny and the upper rooms. They dropped down the well and went around the wall into the basement. Discovered the trapped stair but missed the secret door. They sneaked to the edge to the Kobold room and backed off going the other way. They spotted the trap. Climbed down the shaft. They found Elsa who made them promise to help find her father in exchange for the cage location. Someone sneaked past the kobolds and opened the cage. Then we had a chaos sequence with some fighting, because it was the downstairs crew we did simple tests, the kobold’s priority was to call to the upstairs crew. The team scrambled up the chute (not knowing where it lead!) and escaped with humans.

They lied to Elsa about he father being dead. They did it fast but took virtually no treasure!

You finished up with Æglickír. I’m touched! Did they heal the wounded dragon or destroy the pair?

Sadly I switched out the dragons for my big stupid boss monster found here:

I’ve made an end boss for my campaign. The group got big at some point so I’ve contrived a way of splitting the group for the final showdown. Possibly the last session this week! Campaign Log:

The party won with half the team maimed and the other half sick. One died by having his soul sucked out and imprisoned in world’s best fetter alongside the big bad. But I gave the summoner one final chance to doom the world by separating the Skald’s soul and restoring it to his body. Fortunately he succeeded and didn’t curse everything.