GM new to Torchbearer, some questions

The Action cards from the Player Deck are your best friend here.

Defend Loses to Feint
If the player or monster plays a Defend against a Feint, they lose and do not act. The card says, Do not test Defend against Feint. 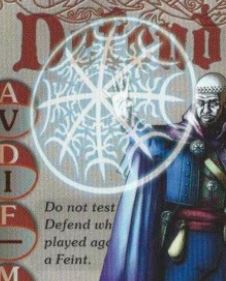 Feint Loses to Attack
If the player or monster plays a Feint, they lost against an attack. The card says, Do not test Feint against Attack. 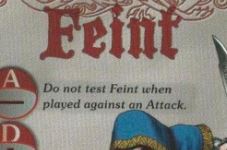 Ah I see thanks Koch - you lookup the table twice, once for each party, not just a single time from the PC s point of view.

To continue taking the non-conflict questions:

Players should always know the ob. That way they can weigh when to spend rewards and earn checks. A test the players know they failed can initially look like a success to the characters. There is room for interesting tension there.

I believe that refers to level 3 traits. You may choose whether to use your level 3 trait for +1s after seeing the tie.

Note that you advance based on current untaxed Nature. If my Nature is 2/3, I need three attempts to learn a skill (the 2 is irrelevant). If I go down to 2/2, I have ruled that you advance skills with 2 beginners’ luck attempts immediately. I don’t know if this is the official approach.

Depends on the terms of the compromise. I have usually set the scope of the chase before the conflict (you need to get to the cave entrance be get clear of this thing, you need to catch the beast before it reaches the woods). The compromise determines where in that range the conflict ended.

So +1s is always applied automatically (if tied or successful) except level 3 traits, which can be left off if desired.

“current untaxed nature” was the cause of my confusion I think: I thought nature has a maximum value and a current value that only differs from the maximum when nature is taxed, the intent is clear now (although I suppose the question is still valid because maximum nature might drop and cause the same scenario).

It sounds like good advice, I’ll do the same for chases -set the scope in advance.

Secret doors are found with Scout, but the factors for using Scout for this are unclear to me.

Most importantly though, how do I handle players searching a room? Especially a room that doesn’t have what they’re searching for? What will the ob be?

Do they need to specify what they’re searching for (secret doors or traps) and then I figure out an ob based on the the factors in the book?
This would work, even for rooms with nothing to find, but then two tests are required to search a room for both traps and secret doors…

Or would I tell players more than their characters know: if a room has nothing to find I just tell the players they don’t need to roll, and if it has something give them an ob and if they meet it they find anything and everything there is to find? (Even if that’s both traps and secret doors)

The first method seems better to me, but is that the intention: players declare what they’re looking for with a test, and cannot find anything except what they’ve specified unless they make another test?

Check out these two threads first if you haven’t already:

I’m probably just over-thinking this, but I’m trying to figure out what the best method for dealing with secret doors & traps would be. Just straight-up say there’s a trap/secret door in here, roll to find it? And just play up the dramatic irony if they fail to find it? Or wait until someone specifically says they’re searching for one or the other and have them roll if one exists? And if there’s not one just say there’s not one here. The only issue I have with this is there’s no reason for the…

Situation: PC has an Instinct to search for loot. Room has loot. Room has a trap. Player describes searching the room, invokes Instinct for a Scout roll. Is this “search warrant rules” in that because they are searching the area with Scout Test that finding the Trap is fair play even if that isn’t the trigger for the Instinct? Does how they describe the search, the specifics of it [potentially] matter?

There’s lots of good discussion in there.

The short answer is: if there is nothing to test, no roll. No secret / no trap = no roll

Yes, the players always need to describe how they do something. How they do something makes all the difference in the world. If, for example, they correctly ferret out discovering the trap from your GM description and use some gear, like a 10’ pole, to detect it, you can say, “Good idea! You’ve found the trap.” (no roll) But, now they need to disarm it with Dungeoneer.

Or if there isn’t a trap, you could say, “Yeah, you poke around the floor, but there is nothing there save for the cold stone. You’re certain there are no traps in the chamber.”

Don’t worry about parties “searching too much.” It is not really a problem in the game. All it takes is one failed search to set off a series of twists that burns through torch light. If it does become an issue for you, give them some twists, grind them down, and then they will learn that they need to be judicious in their actions.

However, I find parties don’t search enough. They are so cautious in trying to survive or focused on something else in the room that they miss a lot of secret doors, forget to trigger instincts, or wade right into traps.

Fantastic, thank you Koch. That clears it right up (that first link was particularly useful).

I had my first session last night, there wasn’t much time for adventuring after character creation, but what little there was went smoothly.

You’ve gotten some great responses so far. One thing I do disagree with is that you need to wait for camp to test Cartography or to make supplies. That would be true of the player’s turn in Mouse Guard, but there’s nothing stopping a player from testing cartography if the fiction allows and they’re willing to spend a turn on it.

One thing I do disagree with is that you need to wait for camp to test Cartography or to make supplies.

I also don’t make players wait for camp to these things in my games. I feel like the grind balances everything out. This also allows the players more freedom in their actions and I think leads to a more interesting adventure phase.

I’m reading this thread First timer with a few questions
I don’t know if there are conventions here I’m not following, e.g always make new threads
Apologies if I’m doing it wrong…

Can a PC help another PC attempting to remove one of their (the first of mentioned) conditions with a healer test?

Can anyone (not just casters) read a scroll and cast a spell from it?

Can anyone learn to be a spell caster in game? Gain the Arcanist skill and spells via Mentor tests? What about ritualist and prayers, can prayers be taught?

EDIT: just came across the answer to my last paragraph/question: no, because you can’t gain memory slots to memorise anything
https://forums.burningwheel.com/t/banish-and-abjure-the-same-or-different-conflicts/

Just for the record, I’m loving your posts, because it’s making me think about all the stuff I’m going to have to address as I may be starting to GM more than one shots soon with a crew of friends. It’s cool to see the vets help you, and onlookers like me hopefully

If there’s nothing to find, you just tell the players.

If the players say “I search for a hidden door in this wall” and there is a door, use the man-sized, location generally known factors.

If the players say “I search for a hidden door” but there is no secret door BUT there’s a tiny gem hidden in a crack of the floor near where they are searching, then you use the factors for finding that item and not the door.

Can a PC help another PC attempting to remove one of their (the first of mentioned) conditions with a healer test?

Can anyone (not just casters) read a scroll and cast a spell from it?

Note that even though you can’t cast/invoke, anyone can learn the Arcanist/Ritualist skills and use them to help.

I’m sorry for being dense Thor, the “no” for point 1 was clear, but the helpful info following it makes me worried my question wasn’t clear:

You can help healers with Healer tests to treat characters. You can’t help with recovery tests.

Yes, cheers @noclue, I understand that. I wrote the original question poorly.
What I’m asking is can you help a another PC perform a healer test when you are the patient?

Yes, you can help even if you’re the patient.

I see. Thanks Thor!

I am reading through all the posts in An Adventurers Essentials, because that’s the kind of masochistic fanatic I am, and because although I’ve come to realise that the guiding principles of TB can be counted on to get you through any situation, and also that over-analysing rules in situations is a bit pointless because you frequently end up looking at things that don’t actually occur/matter in play, I still want to be as prepared as I can be, it can’t hurt (I’ve now had three sessions - the first was almost entirely character creation, the second was a slow and clunky session with everyone fumbling with the rules that didn’t go very well, the third session everyone had a blast).

I’m taking notes as I read things, I will post them if anyone is interested, although I typed them on my phone and can’t imagine a scenario where I have enough time to edit them, and of course they are aimed only at my personal lack of TB knowledge so YMMV.

Enough blather, I actually came to ask this:

From Asymmetric Conflict Goals it seems quite clear to me but I would love confirmation - if the PCs encounter a dragon they can describe actions (“we run up and try to hack its head off”) that will put them in a kill conflict with the dragon, and of course as a result the dragon can kill them, but if the PCs win the kill conflict the result will be something short of death of the dragon.

Is that all correct?