Question: Feinting with the New and Improved Greatsword

I am absolutely loving the updates for Torchbearer 2e. One of the coolest weapon redesigns was for the Great Sword.

The Great Sword denies the enemy any helping dice if they’re attacking or defending, but that brought up a question at our table.

What if the wielder of the Great Sword FEINTS and the enemy calls his bluff and attacks? Is the enemy still denied their helping dice on their attack when they bop the feinting Great Sword wielder?

Does the fact that the Great Sword wielder is not rolling any dice matter?

Thanks for your thoughts in advance!

This massive weapon is used more like a polearm than a sword: It grants +1D to Maneuver and prevents an opponent from benefiting from help when Attacking or Defending against its wielder.

What call would you make as the game master?

Rules as written, the action selected by the Great Sword wielder seems irrelevant. If their enemy is attacking or defending, they get no helping dice.

However, I’m not sure this is Rules as INTENDED. Because as written, this suddenly makes the Great Sword the single safest weapon to feint with, so long as you’re fighting more than one enemy they’re now limited in how much damage they can do on a counter attack. It’s easy enough to explain away narratively, but much of torchbearer is deliberately vague and puts the onus on the individual tables to come up with the narrative reason as to how or why a rule functions the way it does.

At our table our current narrative reasoning is that a Great Sword is a pretty deadly/terrifying weapon and that you’re able to come up with a combination of isolating/intimidating a member of the enemy group with it.

The narrative of whatever situation the player is in is always important as well (such as tight halls giving the +1D to defending with a spear or an open area letting the spear be thrown), but I feel it could be easily justified or annulled depending on whatever the GM was looking to do. A group of goblins attacking a feinting Great Sword user? Sure, the other goblins are kept at bay while only one is bold enough to charge the Great Sword user.

RAW I would have an extremely difficult time saying it doesn’t simply always apply. However the Great Sword being by far the most risk free weapon to feint with doesn’t really feel RAI. The intended rules for the Great Sword feel like it’s supposed to be excellent at maneuvering and attacking (as it was in 1e). But with the current edition, the Great Sword is actually also amazing at defending (giving the enemy -2D is essentially as good as a shield, provided the enemy is attacking or defending!) AND is the safest weapon to feint with. If that’s RAI, I have no problem coming up with narrative reasons as to why that works, and I’m always more interested in RAI than RAW.

It’s a swingy bonus.
Against groups of kobolds and goblins, it’s f-ing fantastic.
Against a single creature or just a few, it’s much less impactful.

Which makes perfect sense as a game mechanic, but isn’t that also a bit ironic narratively?

If you’re fighting a large number of small enemies and being dog piled, you realistically want a smaller weapon like a dagger or short sword.

And if your fighting a big fantasy monster like a dragon or giant, you probably want a larger weapon with greater concussive force to pierce their big ol hide.

Ironically, the bonuses are reversed in TB, the Great Sword is great at fighting mobs but now one of the worst weapons for large enemies.

Apparently that’s how they were used IRL! 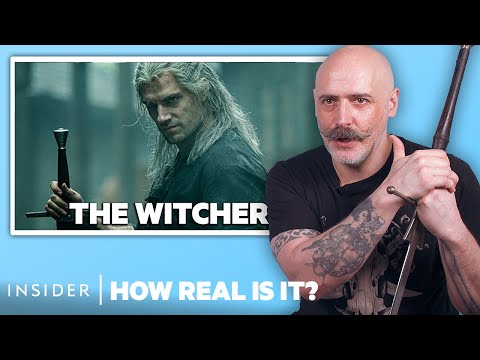 2:05 to see the greatsword in action.

Against a big armored opponent you want a bow or armor-breaking weapon like a mace or warhammer.

Beauty. Give me that sweet sweet verisimilitude * _ *

But I completely forgot that conventional wisdom is completely wrong in this case. A big frick off giant sword is actually worse against a dinosaur or large opponent because you’re increasing the surface area that impact is spread across. You want something like a spike for dealing with giant enemies so you can pierce their hide.

I don’t know why that didn’t click in sooner. Thanks a lot Jared! Skallagrim has a great video on it too. 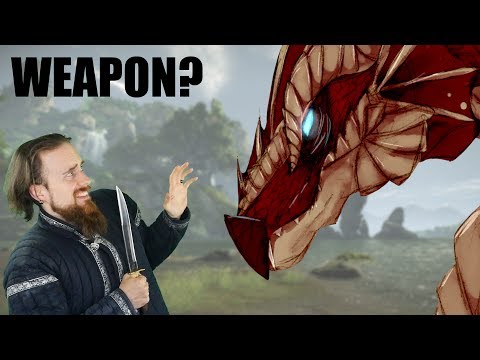 One of the most compelling uses of the historical great sword was to clear an area of attackers (and defend your client).

I think you and Thor have just earned my undying loyalty…

Slightly off topic but related, in Frozen Fiends, mammoths have this benefit: “One-handed melee weapons except spears are ineffective—treat the wielder as being unarmed against a wooly mammoth.”