My character in our ongoing campaign suffered a Serious Wound at the end of a spear. The successful treatment roll knocked it down to 2D and we rolled the dice to randomly determine how many days it would take to fully heal (based on the ranges provided in the book). It was about 90 days of rest…but he didn’t rest. In fact, he went on to do lots of research (burning the candle at both ends in order to maximize his time), and then a two week flight through the woods without any survival skills which basically landed him sick and exhausted. All told, it’s been about 90 days since he suffered the injury…and the way the story is going, I don’t see a break coming for him.

My question is…what do you do long term with this wound?

Do you simply keep it open on the books until he rests the requisite number of days?

Or do you say, at some point, its healed but it’s healed poorly and do something like give him a Trait that permanently deducts 1D from a Stat.

How would you handle it in your group?

I’d leave it there. In fact, I’d probably use it as a source of failure consequences. The wound reopens and starts bleeding. Or it gets infected. That sort of thing. If he doesn’t do anything about it, when they get to a point of downtime, I’d probably treat it like a failed Recovery test.

Do it based on what’s dramatic and interesting and what kind of game you’re playing. A grittier game might have the wound fester and worsen, either with time or with failed rolls. A more rollicking game might allow the wound to just sit there until the poor guy gets some rest. Of course, either way his actions are certainly fodder for trait votes, and again depending on the game the traits suggested could be either highlighting his iron constitution and indefatigable perseverance or recognition of how battered and worn out he must now be.

If I were running a game and this happened, my first question would be what the player wants. So… what do you want? The next question is what the rest of the players think is right. And of course I as GM get a veto (but if everyone disagrees with me I get overruled; unofficial rules of the table). So, what do you want? A character who’s tough as nails and won’t let a little thing like an unhealed wound slow him down or a character who’s gritting his teeth and soldiering on even though it’s costing him his health and might eventually cost his life? Or something else entirely?

I’d very much try to avoid treating this as a failed Recovery roll. You made the roll, so it should have an effect. If it didn’t, it would make much more sense to set the recovery time first, then roll after you’ve rested to see whether it actually helped. Which is reasonable, but not what you did. I know I’ve previously had someone not make a Recovery roll for some time after taking a wound when they haven’t rested for a while, but it was never months and never after rolling.

This is one of my favorite things about BW. That wound has opened up a world of possibilities for you!
So many Health tests to grit your teeth and reduce -1D of pain.
And so many stat tests for advancement that wouldn’t have counted before.

We’ve had this situation happen MANY times our games. In fact, I recently had a character carry a Severe earned in one campaign all the way through the next campaign. It was GLORIOUS. 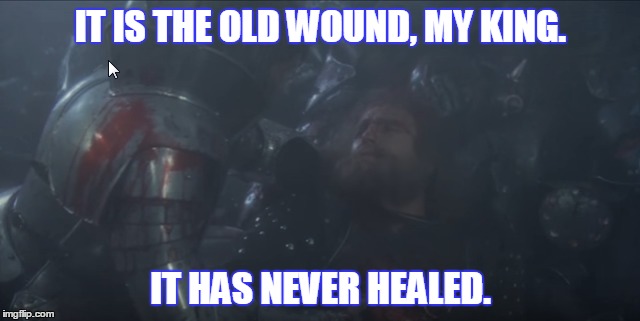 So the “Grit Your Teeth” mechanism, do you allow that for non-tense/non-combat situations? The character (Alistair from Distant Shores) is a builder and maker so those are the times when I would look to do that.

Do you turn that into an additional consequence like any other failed roll? Or is NOT getting the -1D reduction consequence enough? In combat, the consequence is that you’ve spent all these actions that are wasted.

Out of combat, I don’t see a downside to trying which is what leads me to this question.

It’s perfectly legitimate to Grit outside of combat/immediate situations, such as crafting or oratory, etc.

As for failing the Grit test? I don’t apply further failure results. Just not passing it is penalty enough, I suppose.

We use it outside of combat all the time. Perhaps we’re being expansive with it, but it works very well.
A mild failure result like some time lost or a seeping wound might be appropriate, but don’t be too punitive. Otherwise the consequence will outweigh the risk.

The real trick to using that rule is when the effect ends. That’s when things get juicy. You’ve powered through, achieved your objective, but now you have to follow up/escape/etc. and your wound starts aching. That penalty returns with a vengeance.