A Love Letter to BW

From when I was maybe 2 playing the NES Legend of Zelda to the time my brother got a copy of Games Workshop’s Battlemasters to the first time I ever gripped a copy of the Player’s handbook, Games have been a constant and important presence in my entire life. While I cherish all of those experiences whether they were video, board, or roleplaying, one game stands out among them all in how it has stayed with me and that game is Burning Wheel.

I first stumbled upon Burning Wheel in 2011 in the Compleat Strategist in NYC. I had just returned to role playing after a hiatus for a few years to focus on other creative projects. My Pathfinder group was on the verge of dissolution due to players moving away and there was a general dissatisfaction with the D20 system with those players who remained. Returning to roleplaying felt like a mistake, the magic we remembered nothing more than nostalgia. At the time, I didn’t have a sense of the wider roleplaying game market or the revolution that was taking place due to the indie games community. Completely by chance, I found this strange tome that wrote about the kind of game I could only dream of sandwiched between oversized $50 hardcover books.

I took it home and immediately read it cover to cover and then immediately read it again. Then I tried to run “The Sword”, “Trouble in Hochen”, and several attempts at homebrew campaigns and it just didn’t work. I read actual play reports, posted endless questions here trying to figure out what I was doing wrong. Eventually, disheartened, I gave up and forgot about Burning Wheel and roleplaying games in general.

It only took a few months to get the itch again. I cracked open my copy of BWG and felt that same sense of excitement as the first time I read it. As people often do in the city, my old group had moved on so I turned to the old boards to find a group and lucked out, finding a group of players who were not only familiar with the game but some of whom appeared in the playtesting credits.

I sat on the player’s side of the table for once and suddenly the game sang. The focus on story, character growth, and challenging your beliefs all clicked. I saw the reason my prior attempts failed was from years of bad habits built on the assumption that I knew better given how long I had been playing games.

I took that newfound wisdom and began running games again. Campaign by campaign, I uncovered the secrets of this tome and brought more players into the fold. Years later, they still talk of those characters, fondly remembering both their successes and failures.

Burning Wheel is one of the hardest games I’ve ever played. It demands a lot from everyone at the table but it rewards that effort in a way that no other roleplaying game comes close to matching. That difficulty is reflected not only in my journey to learning the system but also in the core philosophy of the rules: through adversity you build conviction or change and grow. It’s a good philosophy, not only applicable to games but also to life in general, which is why I got a reminder to always challenge myself on my forearm: 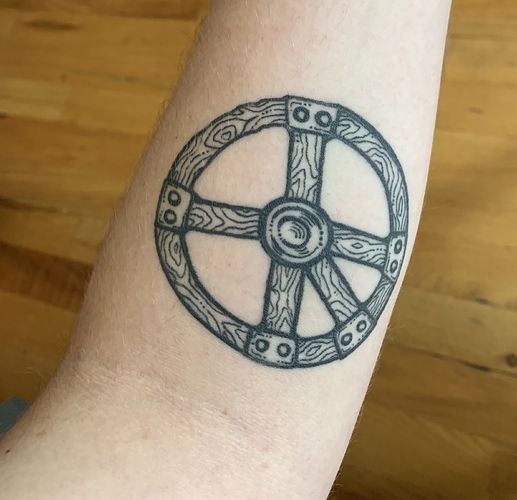 How many other games change your real-life behavior for the better? I’m talking about Intent. BW taught me how to grok the intent of someone’s actions. How to get to the crux of a conflict and name it clearly. It’s helped me so much both in my career and personal relations.

Thanks for the kind words!

Dude, that was beautiful.