A Tale of Dwarfs and Beer (and Greed)

Our Burning Wheel dwarves are so weird and wonderful. I got another reminder Tuesday night in my Burning Warhammer game. I should note that nine times out of 10 I use my own settings, but occasionally I enjoy using a deep, pre-existing setting so I can mine out weird little details and work them in.

This started two sessions ago: The PCs were passing through the imperial capital of Altdorf and they just happened to arrive on First Quaff, an important dwarf holiday, dedicated to the goddess Valaya, where they tap the first casks of the season and the community elders rate the brew. The dwarf population of Altdorf are primarily “Imperial Dwarfs” who are the subjects of the human emperor, but there are also a number of dwarfs from the various dwarf kingdoms. There are tensions between the two groups: The latter tend to look down on the former, often referring to them as “Umgdawi”: manling dwarfs.

The dwarf PC in our group, Hagrig Warson, is from the kingdom of Karak Norn and is the leader of a dwarf mercenary band called Warson’s Aleband. He had resolved his Oath in our last session and needed to find a Longbeard to witness a new oath. The First Quaff ceremony was the perfect place to find one. As an aside, it’s important that Hagrig’s clan wound up in Karak Norn because their original hold was overrun by orcs years ago. They’re refugees. That’s true of many imperial dwarfs too, many of them are the descendants of dwarfs whose holds were lost hundreds of years ago or more. Thematically, there’s a lot of stuff about home, traditions, family and belonging in the Warhammer dwarf material.

At the ceremony, Hagrig’s player made a circles test to find someone to help him. Success. Great! Hagrig spots his old friend Rungni Garilsson, who is Karak Norn’s ambassador to the Imperial Court. Rungni is also a member of the Bugman Clan, who are the most famous brewers in dwarfdom. Long ago, Bugman’s Brewery was famed throughout the world, but it was overrun and destroyed by goblins. The Bugmans swore vengeance and became a famous band of dwarf rangers. But the long and short is that Bugman’s Brew is no longer made and dwarfs will pay a fortune just for a taste if a surviving keg is found.

Anyway, Hagrig finds Rungni just as the elders open a keg brewed by Alvin Khufer of Khufer’s Brewery in Altdorf. Alvin is an imperial dwarf who has never left the city. The elders taste Khufer’s brew and several of them, with tears in their eyes, declare that it is just shy of Bugman’s Brew. They weep because it makes them remember their last taste of Bugman’s.

Rungni, who is very drunk (as are all the attendees), grows irate at this. Shameful to suggest that some nobody like Alvin Khufer could produce something that should be compared to Josef Bugman’s best. Rungni drags Hagrig before a Longbeard then and there and makes him bear witness while Rungni swears a grudge to burn Khufer’s Brewery to the ground in defense of Bugman’s honor. Hagrig also takes the time to swear his oath at this time (he’s going to find the way to a legendary dwarf hold that dwarfs have been seeking for nearly 2,000 years). Rungni asks Hagrig for his help in fulfilling the grudge. Hagrig drunkenly says yes and then Rungni passes out. That’s where the previous session ended. (The other PCs were taking care of some unrelated business).

After that session, I got inspired and whipped up this front page of a broadsheet as a handout. In the dwarf kingdoms, grudges and oaths get recorded in a hold’s Dommaz Kron (Book of Grudges). I decided that imperial dwarfs publish them as legal notices in the paper. 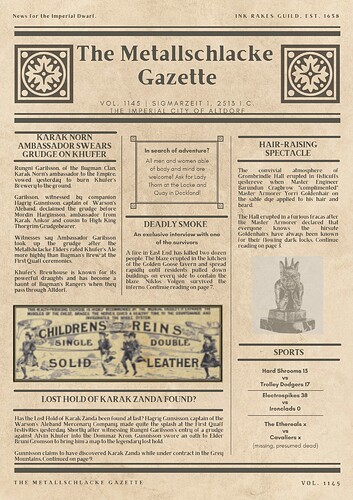 At the beginning of Tuesday’s session, Hagrig’s player wrote a belief about helping Rungni fulfill his grudge.

The other players had troubles of their own. In a previous adventure, while in the town of Bogenhafen, they had run afoul of the High Inquisitor of the Cult of Sigmar, a very powerful and dangerous man whom they know is secretly a member of a very dangerous Chaos Cult. In Bogenhafen, the inquisitor had accused one of the PCs of heresy and attempted to have him burned at the stake with a number of other individuals. The PCs started a riot and escaped in the confusion. The inquisitor has been seeking to even the score ever since.

At the beginning of the session, the group was tipped off by an old acquaintance that the manor house of one of the PCs was under surveillance by the inquisitor’s people, who were ready to arrest (and presumably torture and execute) the PC and anyone associated with him. The only problem? The PC had arranged for a couple of Knights of the Raven (a military order associated with the Cult of Morr, god of the dead and prophecy — the PCs are seeking their aid in a vampire problem) to meet him at the manor in the morning. The PCs (excluding Hagrig) raced through the streets of Altdorf to try to intercept the Raven Knights before they fell into the inquisitor’s trap. Unfortunately, they didn’t reach them in time. [Streetwise test linked into a versus Speed test against the inquisitors to reach the knights first].

It looked like things were going to devolve into a fight (I’ve been working hard to bring at least one fight, range and cover and/or duel of wits every session of this campaign), but the gray wizard PC to use a spell to calm things down. We’re play testing a new version of the Abstraction & Distillation rules for sorcery. The player attempted to take the Magesense spell and swap out the Enhance impetus for the Influence impetus to effectively make a version of the Persuasion spell that works on groups. The player failed the roll to cast the spell by 4, so there was all sorts of variance on the Wheel of Magic. The spell wound up largely the same, but with Sight Origin and Permanent Duration. The wizard invited the inquisitors and the knights to put away their weapons and talk out their issues over a drink at a nearby tavern.

The players came up with a plan: Hagrig is a relatively new addition to the group, so hasn’t run afoul of the inquisitor yet; the inquisitors’ goons wouldn’t know his face. They sent him into the tavern where the inquisitors and knights were drinking. He bought nog for the entire tavern and then got everyone to drink to excess (Drunking test). The nog? Alvin Khufer’s brew.The player passed the drunking test with flying colors, getting everyone (except himself) to pass out drunk. However, I decided that the taste of Khufer’s Brew was enough to force the dwarf to test his Greed as per the She’s Magnificent rule. Steel test. He failed. Acquiring more of the brew at that moment was no problem — everyone was passed out. But the long-term consequences are delicious: He’s become obsessed with Khufer’s brew and the recipe. No way he can allow that magnificent brew to be lost when he helps his friend, Rungni, burn down Khufer’s Brewery and everything Khufer has built in Altdorf…

Love it. It’s almost a perfect case study in how to build up dilemmas and meaningful conflict for PCs.

Hagrig has promised he would help Rungni burn down Khufer’s brewery, but he must have Khufer’s brew! This is turning out to be quite the tale.

You see! No game can replicate this kind of world building! fantastic Thor!