AP: the Pillars of Svarttårn (Conclusion of Basilica of the Leper Messiah)

Firstly, I want to make it clear that it was not my intent to have a session where the finale looked like the most metal of metal album covers.

Also, it wasn’t my fault.
(it probably was my fault)

I’m just saying, you’ve got to watch out for young Skalds who feel that the world is their stage.
(Belief: “Don’t let the truth get in the way of a good story”)

They seem to look at something and then say “what would make the story of this look more metal?”

And, you should be aware that characters and players who work/plan carefully, set things up and script well can achieve Great Things.

And with those points noted, on with the show. 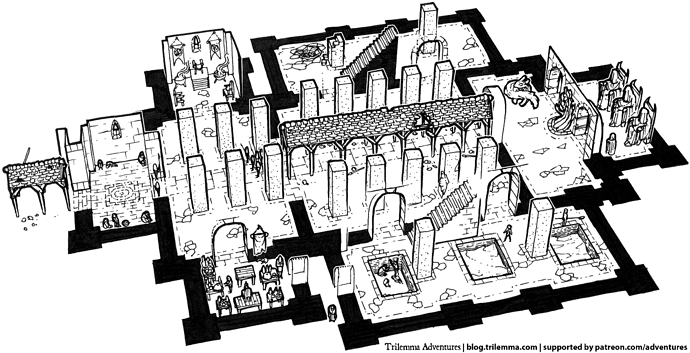 We are in Middarmark, undertaking a rebranded version of @Fuseboy’s Basilica of the Leper Messiah (picture above).

It’s taken quite a while, but the party have just about wrapped up their adventures in the mysterious monastery of Gorm the Boneless (Part I here).

Due to the ritual they performed before this adventure started, they are Hungry & Thirsty.

Whilst they are Hungry & Thirsty, they are inconspicuous to Ormina the demon (she will ignore them / assume they’re nothing to worry about, unless they draw attention to themselves), so they have been super keen on maintaining this.

They have been very careful to brew alchemical potions to remove the Exhausted condition, and camp every 3 Turns (or a few Turns later if they had the potions to quaff).

In the last few sessions, they’ve managed to make and replace ash-bricks into half of the 20 pillars (each requiring a Labourer or Stonemason test).

That’s a lot of tests, and a lot of camps, if you’re trying to avoid the Grind.

What remains now is the 10 pillars in the centre of the courtyard (see above), which are the most exposed. The party’s plan is to replace an ash-brick on each of these from the top, keeping out of sight.

That means lots of clever thinking for going pillar-to-pillar, using Dungeoneer, Labourer (once they stole a bridge), and many many many Lightness of Being spells.

They have Driven Off some of the skeletons guards, when the ceiling collapsed on them, and then taken them on in a Kill conflict.

They have rushed upstairs and fallen into a Kill conflict with the skeletons above (some very tough conflicts, there, scripting and treacherous dice being what they are).

With the undead dealt with, they managed to make a concealed camp upstairs, and read their Adventure lead that they looted.

It’s a lead to the Beacon of Enon Tor, via a letter.

If memory serves, @Thor pointed out this adventure as a fun one, years ago, although I’m blowed if I can remember where.

So now, with camp broken (and a Twist of Ormina investigating all of those dead skeletons right on top of them), it’s game on.

Ormina, for her part, cannot understand what is going on.

Someone was cured of the plague (she’s bitten them again to reinfect them, and caused their words to become smoke, but still, this is Not Good).

Also, the skeleton guardians have all been destroyed. She will get to the bottom of this. She hopes.

The party uses a couple of castings of Arcane Semblance to look like skeletons, and stand around doing skeleton things, so as not to attract attention to themselves.

Gorm heads upstairs to join Ormina, and the two have a conversation, with Gorm starting to realise that Ormina keeps forgetting about these 3 skeletons (the party manages to subtly signal to Gorm who they are).

When Ormina heads back downstairs to continue her investigations, they have a brief chance to privately talk to Gorm.

Whatever contract binds Ormina and Gorm, it prevents Gorm from any direct action… for now.

However, at the party’s request, he is prepared to cast Eagle’s Dance upon one of their number (Grimwald is overjoyed to volunteer).

They also desperately want Ormina distracted, but that is easy enough: Gorm is going to be lecturing / teaching in the other Svarttårn, and Ormina will accompany him as more more modestly sized stoat.

With Ormina and Gorm away (for a while), the party weighs up their options, and opts for a full-on sprint.

They drink (for the first time in… many sessions), lose their protective ritual, and then push through the Grind.

Those rations they’d found as part of previous loot were no longer mocking them, but essential in keeping them moving at speed.

Grimwald revelled in his (temporary) ability to fly, flying high above, ferrying rations from Tryggr (upstairs in the cloisters) to Ulla (who was using her own magics to move from pillar to pillar).

There was a tough moment when Tryggr (who had been helping by distracting the brick-makers below) claimed he was hired to look into why the skeletons were destroyed, and one of the workers insisted on accompanying him upstairs.

Fortunately, Grimwald went vertically up a long way, and Ulla used Phantasmal Vision to cover up the work they had done.

When Tryggr then hinted to them about nearby undead, the worried worker rapidly retreated downstairs, allowing the party to finish the last pillar, and camp, just as Gorm and Ormina returned that evening.

In the night, they “complete” the last pillar (barring 2 bricks), by rubble-filling the interior, and veneering ordinary bricks so that they look right.

They purposefully leave their last 2 ash-bricks out, so that the pillar can be completed by the workers the following day.

As Ormina has never seen them, and they have a number of fair excuses to see Gorm, they head through and converse with the Lord of Svarttårn whilst Ormina remains asleep, curled around the Choir.

Tryggr the paladin gives a loud-enough report to mask the private conversation the others have, and the stage is set.

Gorm cannot (will not?) directly assist them until the last pillar is complete (even if it’s… not done in line with building regulations, shall we say).

They now quietly prepare themselves, using Holy Water (and Ritual) to sketch out a protective circle for themselves near the First Silence.

They use the moth dust that they had prepared sessions ago (from Roost of the Condor Queen) to cause Exhaustion to Ormina, by introducing it into the pipes of the Choir (Good Idea!).

Then, they hide and wait for morning… and the completion of the last pillar.

As the pillar is completed, and the (now subverted) Great Work begins to trigger, Ormina rushes to Gorm’s inner sanctum, where Tryggr and Ulla wait alongside Gorm.

Meanwhile, Grimwald, the 17 year old Skald, walks the length of the courtyard, lute in hand, as the pillars / monoliths spark and flare around him, calling to the spirits in them, and the monoliths themselves.

He seeks to turn their pain, anger and power into a weapon against Ormina.

The player chose to walk the full length, exposed to all 10 pillars, in order to get the biggest effect.

Lute in hand, Oratory in full effect, he strides forwards.

Three of the pillars wrench themselves clear, and hover, rotating slowly and sparking.

A host of spirits manifests from another, quickly brought to heel by a darker malevolent spirit from the brick they had constructed (this is only the second spirit manifestation, rather than the third, so no demons manifest - lucky escape, adventurers!).

One monolith ripples and the landscape around it shifts as it opens a rift and begins to teleport to some distant mountain forest.

The sixth one increases in size sixfold, until it is 120 feet tall, stretching the dimensions of the courtyard in strange ways.

The remaining four catalyse spells from the Void, and flash-burn them onto all surfaces in the courtyard (including Grimwald’s lute and clothes). For Grimwald himself, these 4 spells burrow their way into his skin and flesh, like writhing living tattoos of flame / foot-long centipedes beneath the skin.

Grimwald’s Voice of Thunder calls out (he is also Demon-wise), and he convinces the 6 “active” and involved monoliths (the giant one, the malevolent ghost one, and the four spell pillars) to lend him their power, as he charges into the Sanctum, and the confrontation with Ormina.

This is a Banish conflict, with Gorm as an active participant. Ulla leads them, as this is really Her adventure (as part of this is to get Gorm as her Mentor).

The initial Feint by Grimwald, with the power of the monoliths behind him (+2D Feint) knocks out 8 Disposition.

The (independent) Manoeuvres both max out, so Ulla manages to clip on the white metal collar inscribed with Ormina’s True Name (disarming her Shape-Shifter weapon), and Ormina wrenches away, so that Ulla loses hold of the collar.

The independent attacks finally banishes Ormina, and takes over half of the party’s Disposition (it would have dropped Tryggr if he was not Stubborn).

One round, one demon.

Goodness! That was a most satisfying conclusion!

We’ll do our best!

They managed to secure a Treasure Map from the loot for Ormina, so I’ve also got to work out where that might point to.

I love the Trilemma adventures (and have backed the kickstarter for the book) and it’s wonderful to see such a totally metal play report from one of them in Torchbearer!

I can just imagine the mood at the table with all of those monoliths activating at once!