Last night, our Torchbearer campaign came to an end.

The campaign was quite a run, and a wonderful experience.

So, my thanks to Rob, Chris and Alex (and Sean in the 2-shot) for playing in the campaign.

These are names that will ring down the years in our Middarmark, for their deeds, for the stories told of them, and for the seeds they planted aimed to the future.

The Saga of Tryggr (as composed and performed by Grimwald “the Cat”) is an epic that outlasts Middarkmark and will pass on into modern times.

From appropriately humble / scrabbling-scummy adventurer beginnings, they have walked on the World Tree, brought low demons, formed a community and set up a secret society, torn (un)dead tyrants from their rest, faced the remains of the Selee in strange places, defeat a Black Dragon, and finished their last adventure on a mythic-feeling present-filled sleigh in winter overseen by a jovial bearded fellow.

(Timing-wise, being able to end with a “winter episode” was just grand).

And yet, the personal is always there.

Ever since they encountered him during the events of The Shattered Gate, they have viewed Gilemos (sic.) as their enemy.

A number of their adventures have been chasing after / following the trail of Gilemos.

However, right at the end, when they find him on the wagon/sleigh, about to make a deal with a ____ (an immortal of the Second Silence, a servitor(?) of King Death), they do not fight him, but instead they convince him to turn aside from this dark route.

Ulla (as part of the compromise) agrees to pay the price of the ____, and places her hands into the “hands” of the ____, knowing it will kill her.

It is only when Grimwald shoves the ring back on Ulla’s finger that they discover what Ulla’s ring does (Red-Rabbit’s Ring of Regret and Resurrection by @Jared, which brings her back to life as her brother dies in her stead).

And then? Then they take on the ____ (which looks something like one of the Leshy, a very large black robed / cloaked figure with a cow’s skull for a head), which equips “Death Touch” as its weapon.

In a wonderful epic-feeling Kill conflict, they take on this Might 7 immortal (statted like a Red Dragon) and kill in without compromise.

Where are they now?

He joins them, assisting them where he can, moving from one to the other as need and mood take them. He is part of Grimwald’s act, he assists Ulla in research and magics, and acts as treasurer for Tryggr.

Throughout, he still performs minor necromancies and enchantments, creating animal servitors to assist them in the work that they do.

And in the futre? Afterwards?

Well, their secret Order of the Silver Spear will continue, and its members will be there when Ragnarok comes.

Tryggr’s shield, engraved with all the foes he defeated waits on the tomb of Sigrund Shieldbreaker, underwater at Mirror Lake.

The Silver Spear itself, they have carefully hidden, leaving a trail of clues through their old adventuring sites, for the time when the need is great, and new heroes will need the tools of old heroes in the coming struggle…

My thanks again to Rob, Chris and Alex (and Sean) playing in the campaign.

That’s amazing! Thank you for sharing!

I should also share the artwork, courtesy of Luka Rejec (his site here)… 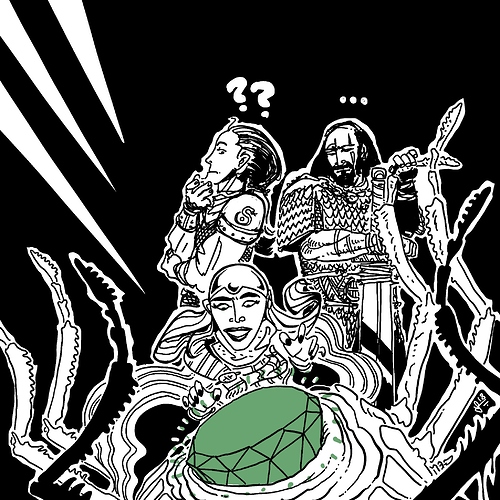 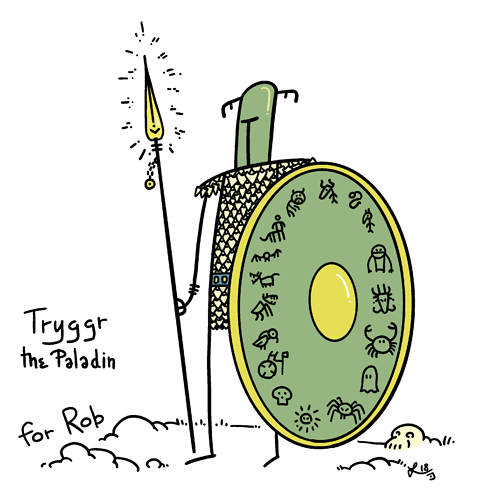 Did they not know what the ring did before they slipped it on her finger?

They knew it had something to do with protection / resistance from death, and the ____ shied away from it.

They were also very conscious of the dangers of the ____, as Grimwald had walked up to it and shaken her hand, causing an Ob 7 Health test, which he passed (making him Sick, rather than, you know, Dead).

Do you have pictures of character sheets you could share? I’d love to see the skills and wises these characters came up with after four years of adventuring.

Will do… bear with.

I need to get scans done when I get home. 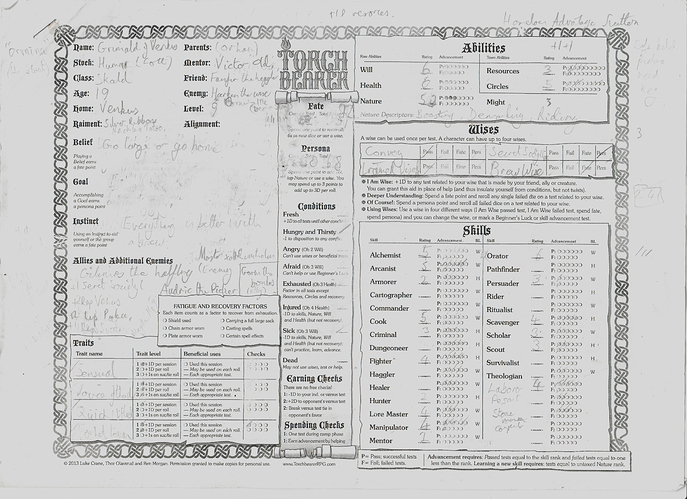 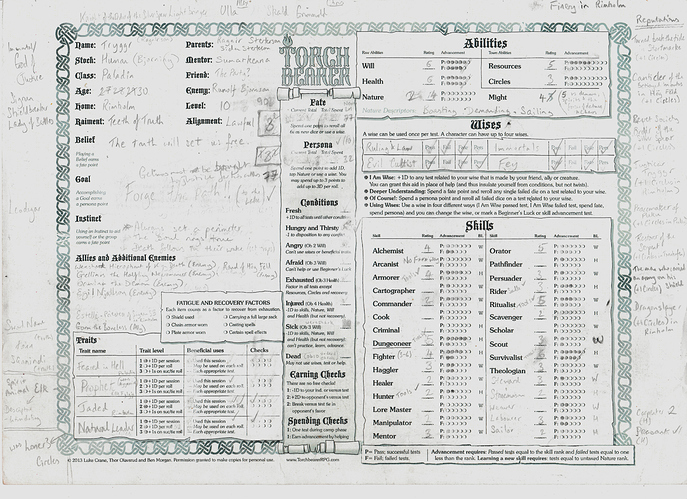 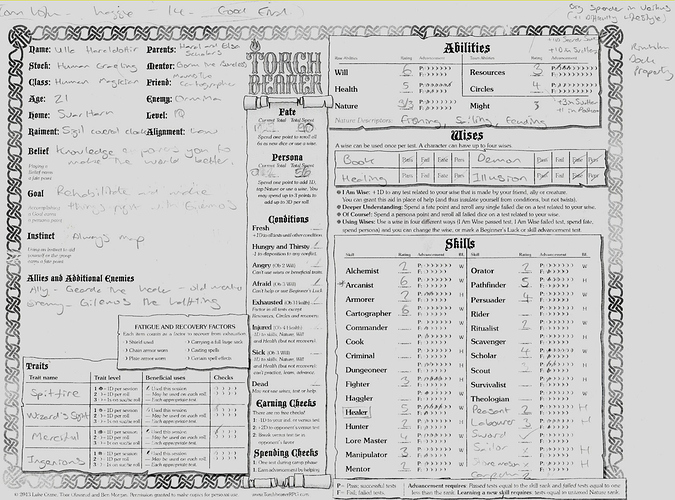 These are so cool.

Did you have a favorite adventure?

How did play feel different in year 4 compared to year 1?

For me as GM? I probably loved Basilica of the Leper Messiah or Tannóch, Rest-of-Kings the most. That had a lot to do with how the players tackled them.

However, I know that there was also a lot of love for…

Actually, I think we had nothing but good ones.

There were adventures I could have run better, and things we could have done differently, but it was a very fun and solid experience.

Speaking of magic items, it felt that there were, maybe, six or so amongst the players?

Mind you, having just worked it through, that total is higher!

NB:
Magic items do not need to be powerful to be useful.

Also? The players once looted a simple extra waterskin and practically high-fived about how great that was.