The Undermountain Base Camp

A maze of underground caverns stretches far below Highwater’s Yawning Portal Inn. The Twisted Caverns, also known as the Farms, are a series of natural tunnels and caves suitable for habitation. Halaster’s mightiest magic connects the River Sargauth, the River of the Depths, from the upper levels to the deeper levels to provide some water. 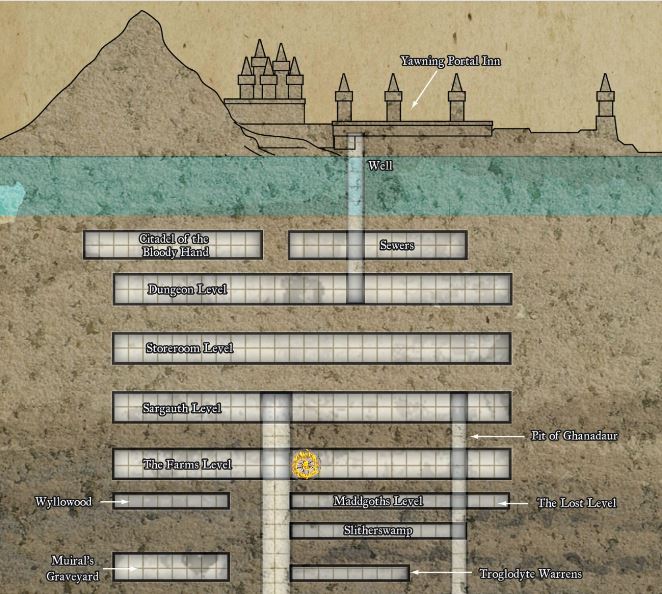 The party searches for a place to create a halfway base camp to further explore Muiral’s Graveyard below. After exploring a few areas, they find an area of the Farm Level that looks promising.

Safe camp. Once a base camp is established, the party no longer rolls for camp events anymore.

The New Base Camp

The group has taken over an abandoned dungeon chamber with a door that can eventually be locked or barricaded. From the making camp tests, there is enough basic shelter for the party amid the cave nooks and the nearby river provides enough water for a small group.

Terrain Feature: Ancient skeletal remains in the alcoves–best to leave those alone for now!

3 checks remaining for base camp building

The party stashes some saved up rations, jugs of water, and loot in the cache.

Check 1: Scrounge around the dungeon for materials to make alchemist workshop

Scavenger Ob 4 to find gear for the Alchemist workshop.

Success. This dungeon is littered with stuff here and there.

The warrior tests Carpenter, fails, but becomes Exhausted after getting the work done.

Check 3: add a barricade to the door

There are enough materials left over in the existing room to fashion a barricade without having to scavenge for more.

The party returns to the adventure. Later, during adventure phase, they head back on their map to one of Halaster Blackcloak’s magical chambers.

Once they reach the River Sargauth, they refill their waterskins and jugs. Then, the party uses the map to fast travel back to base camp.

1 check remaining for base camp building

The party has 1 check left over after taking care of other things to spend on the base camp.

The mage sets up the workshop with an Arcanist test Ob 2. Success!

They pick up some of their loot from the cache for later. 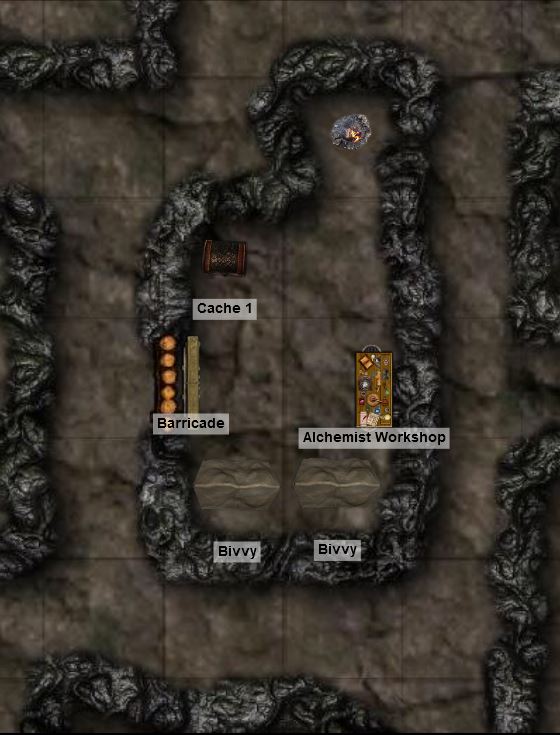 The party breaks camp and returns to adventure. Later, laden with some gems and gold, they fast travel from the base camp to town.

The theurge hires a sentry Ob 2 Circles and +1 Lifestyle each to guard the camp.

The mage persuades his friend Dota the Sage to join the base camp for a share of some booty. No test.

Base Visibility:
0 occupants (no one there)
+3 structures
+1 barricade

The party drops off the wizard and sentry at the base camp. There is plenty of food in the cache for the hired help.

The party heads into new dungeon territory deeper in the dungeon. 8 turns later, they head back to base camp.

4 on a 1d6. Success: The wizard made a random elixir while the party was gone. He creates an elixir to remove Angry.

The party fast travels back to town.

The party levels up. They buy more rations for the camp. They pay lifestyle and return to the adventure.

After leaving town, the elf picks up a check on her Pathfinder roll on the way to base camp. In a twist, the group is lost and encounters a wandering skeleton by the dungeon entrance. The dwarf earns a second check and dispatches it.

Out on adventure, the party leaves adventure phase for a regular camp (not base camp).

Camp Sustenance
Since the party is out elsewhere, the sentries and wizard provide for themselves by eating from the cache (-2 food, -2 water).

The party heads back to town and wraps up the adventure.

The sentries mount a defense of the base camp and drive away the dire wolves.

The party buys some more rations and supplies to stock the base camp.

The party returns to Muiral’s Graveyard and goes deep into the lower levels of the dungeon. They are able to get down this far because they have a formidable base camp and a stable cache to store loot and supplies.

Later, when they return to base camp, the sentries tell them all about the dire wolves.

The wizard friend rolls a success on his production roll and created an elixir to remove Afraid, which is greatly appreciated.

Well that seemed to work nicely.