Okay if a character has 10 on his physical tolerances and gets hit with a B3 injury, that is understood, and marked on the first horizontal column under the 3 space. However ,if character gets hit with G3 on the table, is that a B3 hit also, or is it a B3x2, or something completely different? How is a G injury computed on the graph of the Physical tolerances Grayscale?
Thank you

In Burning Wheel Revised the PTGS was a big circle! 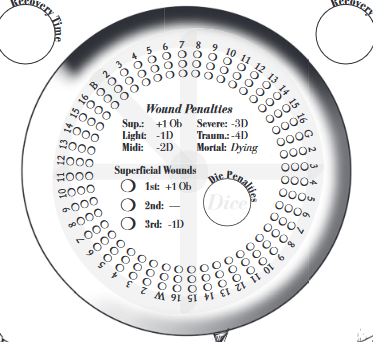 However ,if character gets hit with G3 on the table, is that a B3 hit also, or is it a B3x2, or something completely different?

Unless you have PCs who are elder Trolls or the greatest of Elves and Orcs, if hit with a G3 they die (or Spend the Will To Live)

I have been playing and running Burning Wheel for 12 years and no PC I’ve run for has had a Grey-Shaded Mortal Wound, so the niceties of the character sheet haven’t ever been important. Outside of magical, mystical, otherworldly entities (who get Banished/Abjured instead of stabbed) I think the highest MW that has existed in my games has been an NPC who would have had B17 MW, therefore having G1. This King Of Trolls would still have died to a G3, no questions asked.

well the reason asking is i am making a cursed weapon for my campaign. This weapon will be bonded and cursed to the one who takes the grip. the weapon will be have 12 personalities depending on the roll of when the weapon is unsheathed. Once unsheathed it must draw the last blood of its target. The weapon must kill every 12 days and be quenched, otherwise the player starts going mad with increasing Ob roles to will. The weapon is actually a part of a tooth of a dead god. Some personalities have the grey injury since it was closer to the death of the god and more powerful. The farther down the roll is, the farther the personality is from the time of the god dead so then the weapon switches to grey hit instead. The idea is to create a weapon of great power, but the player needs to kill every 12 days or go mad. If the player accidently draws its weapon and no enemies, well then the dilemma begins. Should be crazy fun. Still working out the details.