Bring out your dead?

I was wondering if there’s anything in cannon about what the mice in the territories do with their dearly departed.

I have a plot idea that rather involves grave robbers, but it occurs to me that they might not even have graveyards.

Wasn’t there the time that the carrier of the Black Axe died? Didn’t they have a funeral pyre?

Maybe that is what they do for heroes.

I reckon that a lot of mice die violently and are eaten by predators.

They probably do something that ties in with Nature. Maybe they do megalithic (or is it microlithic) communal ossuaries?

It is your call really.

Okay, I just wanted to be sure I wasn’t going against cannon.

Maybe this help a bit: 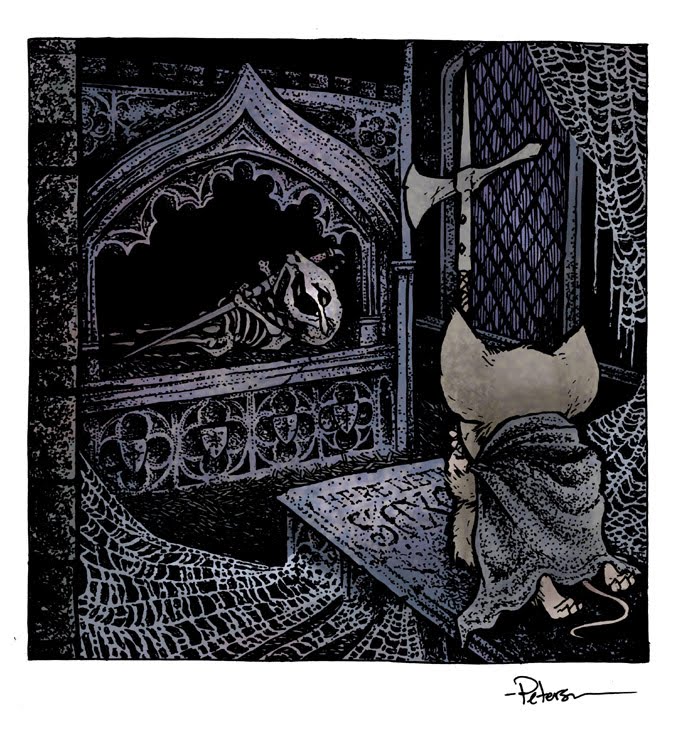 My idea is that our heroes are sent to [any place near the wild country will do, really] to investigate reports of attacks by other mice which stink of the dead who move by night and drag their victims screaming into the darkness. Once they get to the town and ask around a bit they learn that graves are being disturbed. A Mouse-sized hole in the soil and a single set of tracks leading away (not towards) the site and disappearing in the woods…in the direction of the attacks.

I set my players up for a zombie hunt.

What’s really going on? A few ravens are running a protection racket. They’ve convinced some of the local mice that they can lead a local wolf pack right thru the scent border if the Mice don’t pay the price in flesh. They’ve been doing this for some time, and it’s been simple enough. The Mice dig up the older graves that no one really visits anymore and pay the birds off with those, ravens are carrion eaters so a rotten old mouse suits them fine. No one even noticed the turned over soil. Lately, however, the ravens have gotten greedy and demanded fresher and fresher meat (or the Mice are out of older graves and have to hit the newer ones) so the Mice set up this ruse, the Raven flies a Mouse in, the Mouse does the grunt work of digging up the body and stripping it of any clothing, the raven eats and flies off and the mouse walks away leaving the single set of tracks. But the Raven’s apatite has come to exceed the local grave yard’s population, so the mice have been snagging unwary travelers and dragging them into the night. To avoid being caught, they disguise themselves as the departed, wearing the burial garments.

It’s a rough idea and needs fine tuning. I’d like to find a way to give the antagonists a cult-like feel as if this is the way it’s been done for generations. If I can do that, than I can drop the protection racket angle and just have them leaving “offerings” to ravens who are enjoying the free meal.

Maybe this help a bit:

Okay, that works for an honored Mouse…a member of the Guard or of some other high social standing, but what about joe layMouse?

The settlement could bury there dead under fruit bearing trees or bushes that are the main supply of food for the settlement. This could be explained purely as a practical choice (makes sense to use the bodies as fertilizer) or it could contain elements of spirituality or religion ( giving the dead to the earth mother, completing the sacred cycle, ectetera). Both could easily be dropped into he Mouse Guard world.

Okay, that works for an honored Mouse…a member of the Guard or of some other high social standing, but what about joe layMouse?

It’s a medieval fantasy role-playing game. Unless the Comics say otherwise, I want cemeteries and graves.

The settlement could bury there dead under fruit bearing trees or bushes that are the main supply of food for the settlement. This could be explained purely as a practical choice (makes sense to use the bodies as fertilizer) or it could contain elements of spirituality or religion ( giving the dead to the earth mother, completing the sacred cycle, ectetera). Both could easily be dropped into he Mouse Guard world.

This is more or less what I was thinking, too. Most dead mice go–probably with little ceremony–back to the land.

Here’s something I found that I’m dying to use in my upcoming BW game, but sounds like it would work just as well in Mouse Guard, a Tower of Silence.

Essentially, in a bid to avoid contaminating your community with the dead, you put them up on a tall tower, exposed to the sun. In the middle eastern climate, the bodies dry fairly quickly and don’t putrify, then birds of prey come and pick clean the bones. The bones then fall down through a grating into the ossuary pit. How cool is that?

I suppose for Mouse Guard, with its wetter climate and much, much smaller protagonists, a comparable thing it might make more sense to put the bodies by an ants’ nest, or leave the body for the crows (which would take it away entirely).

Did a bit more poking around on Towers of Silence - and man, there are some gut-wrenching pictures on the net of an active one. Not quite what I’d imagined. I had this idea of shroud-wrapped dead being discretely pecked at by well-mannered falcons and whatnot. But nope, it’s a whole lot wetter than that. shiver

Have you seen the Tibetan ritual of the dead with the vultures? The vultures take your soul up into the wind – after your body has been butchered and devoured.

No, I hadn’t - Sky Burial apparently. The pictures I saw of the tower of silence suggested the bodies are left out, still mostly clothed in whatever they died in (I assume poverty is a factor), whereas these sky burials look way more labor intensive.

Even the traitor merchant mouse got a makeshift grave site in the wilderness in Fall 1152. If the mouse was someones family member, I’m pretty sure it’d be buried somewhere sentimental.

That is a very good point.

The Tower of Silence thing is wild, are there any “desert” areas in the mouse territories? I wonder how you could incorporate some desert characters into the game.

Seems like if you pulled the patrol out of the Territories and into someplace like a desert, you’d need to adjust various aspects of the Seasons.