It is a time past history, and the world is aflame. Deep within the Mountainhome, the Dwarves wage an unceasing civil war for possession of the Burning Wheel, sealed within the heirless High King’s vaults, consumed by their greed. The Elves have left this place in grief some centuries ago, letting their spires and citadels fall to ruin and plunder - and leaving those too young to remember their glories to grow bitter and dark with their hatred. The Human and Roden joint-kingdoms are alive with life and their own petty feuds, wars, and skirmishes - and happily make use of Dwarven exiles and mercenaries who come up from the deeproads in disgrace, battle-hardened and hungry for loot and plunder.

And within a ruined Elven spire, trapped with their backs against a wall, hemmed in by enemy action, a desperate splinter of a human mercenary company faces a Griffin, and loses. After two sessions of bitter struggle against a dwindling food supply and an angry monster atop the spire, that’s where my group left the situation: After failing to tunnel into an Elven Vault that could possible contain vital supplies, my surgeon and quartermaster players mustered their dice and led a bitter Bloody Tactics test against the creature who’d kept them trapped for the past few days, and though they managed to kill it, the quartermaster took a B9 Mortal Wound and passed on. The surgeon fled the company in disgrace (as they blame the Roden for failing to heal their paymaster and for making the griffin so angry in the first place) and the company split up to try and escape the dwarves who were in the employ of their opponent.

But, after talking about things, the player of the deceased character wanted to pick up with a side character I’d mentioned offhand - their employers Bodyguard, a knight with a magic sword (which was conveniently missing so they couldn’t help fight the Griffin), now released from her oath and seeking her sword again (we figured the Roden could rejoin as an adventurer/wanderer). After some discussion we worked out that while the sword is probably well made, it is in fact the Knight’s Faith that empowers it and makes it so special. There are also still the vaults of the haunted elven tower to loot!

But now I’m a bit stuck, and I turn to you all for some help:

And so I turn to you all! Help me brainstorm some cool challenges for my PCs to face, and treasures for them to find - the war between the local human kingdoms is all but won, with the richer kingdom having turned to Dwarf Mercenaries to turn the tide, but that leaves a host of gold-hungry dwarves roaming the countryside, a sacked city, and strange unexplored ruins to uncover. Happy to share more information about the world or the situation up to now as needed.

What are the character’s BITs?

How did the knight lose the sword in the first place? 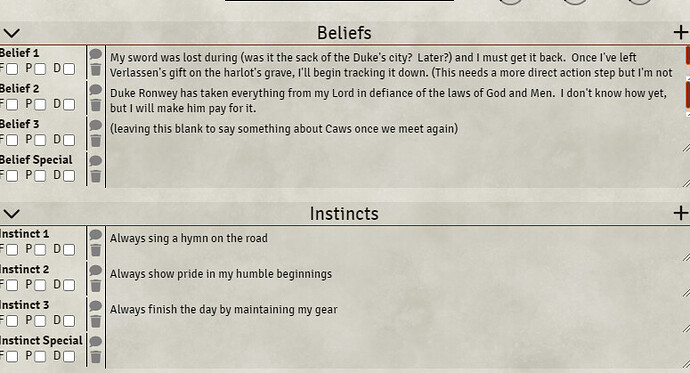 image775×419 78.9 KB
Here’s a draft of the Knight’s (I imagine they’ll be refined further through a little play and discussion, but it’s enough for me to start thinking.)

The sword was lost in the sack of Duke Verlassen’s city (Verlassen is the Knight’s Lord) or in the evacuation to the Elven Spire which was the site of our last game. Ronwey is Verlassen’s rival, who has invaded with the help of dwarf mercenaries. Caws is the name of the Roden surgeon from our previous situation (we’re skipping forward a matter of weeks, I think, not much longer.)

Caws, our surgeon, also has rather rough sketched beliefs, but from talking with the player I have:

Ronwey has the sword. That or a Dwarven lackey.

There’s plenty of cool Elven swag from the Elven resources list, though cash is likely not to go amiss.

I’ve absolutely no idea what’s inside this ancient elven vault, and would love some cool suggestions

If you hunger for some chaos, let the party find something way beyond their pay grade, a magical artifact of extreme power, that the party are unable to use, but in the right (or wrong hands) could turn the tides of the setting. Then let them try to figure out what to do with it, with all major factions trying to get their hands on it.

Ronwey has the sword. That or a Dwarven lackey.

This is probably your best bet. Or for a longer arc, it’s passed through Ronwey onto someone else (which the party learn after confronting Ronwey).

The Knight wishes to make the belligerent of the war (the evil Duke Ronwey) pay somehow, and I’m trying to think of interesting ways to challenge that - especially since she is Faithful.

A coup by the dwarven mercenaries, excommunication by the religious authorities, a duel (with some challenges to get him to accept), petitioning of other noble houses / king to intervene and remove the Duke from power. I’d probably leave it up to the players to make a plan, though you might want to challenge the belief by having some disaster imminent on the city, which would ruin the Duke, but also hurt the people, with the party having to choose whether to help the Duke and the city, or let them both fall.

to get the knight involved in sword discovery and make Duke Ronwey pay, have him run into one of the Dukes heralds, steward,lackeys at a tavern. During the encounter have the NPC lose or drop a message being carried for the Duke. The message is a correspondence to someone in Dukes employ to find out what is taking so long for the expedition. The Duke says he sending up a scholar with the map to meet with the expedition. Tada, perhaps intercept the scholar and join the expedition or trick the scholar in thinking your the expedition and the race is off to the vault and the sword that lays within. Just a thought.
p.s. then to make it even more nasty. have the team when reaches the vault, find no sword, but a sword inscription that leads another chase to the swords location. Like a Indiana Jones adventure.