Recently bought Burning Wheel and having a blast reading through.

I’ve looked around to see what people thought the sweet spot when it came to the number of players was. I most often see three be the sweet spot, with some people preferring four or enjoying two.

However, so far, having read about half of the main book, I get the feeling it might be a good TTRpg to run some games on-on-one (one GM with one player)? I’ve been looking for a game that’s appropriate for that and I’m curious if Burning Wheel could fill that niche, and if so, what should I be looking for or adjust?

Yes. One-on-one is totally legit. The Codex has some commentary on one-on-one games starting on page 52, if you have that book.

Things to watch out for include the Help economy. Receiving and giving Help is a big part of passing tests and advancement. With a bunch of players, that economy is easier to access; one-on-one, you and the player have to make sure to include prominent NPCs that can give and receive Help.

And Artha awards. Embodiment, Workhorse, and MVP are especially noteworthy because they require group vote and/or ephemeral fulfillment conditions. It’s very easy to be overly generous or overly stingy – and/or passive! You gotta put in real effort in reflection when making these assessments.

Trait votes have basically the same deal as above, being based on votes and ephemeral criteria.

Keep an eye on those and you should be good.

And welcome to the forums!

Burning Wheel does better than most RPGs with fewer players, because of how intensely beliefs can be run, can be used as signals for play, and so on.

Yes. One-on-one is totally legit. The Codex has some commentary on one-on-one games starting on page 52, if you have that book.

Glad to hear. And thank you for the page reference, I haven’t gotten to the Codex yet but I do own it!

you and the player have to make sure to include prominent NPCs that can give and receive Help.

Any page reference of systems or rules that may help with that?

Also, an additional question, the book already touched a bit on playing with the number of lifepaths of a character, giving them some artha points at the start and moving the cap of exponents to manage the power level. How would you use these levers to make the one-on-one experience better?

Any page reference of systems or rules that may help with that?

Relationships and Circles are relevant:

Relationships are characters the player can pay points for in character creation to ensure they exist and are relevant to the game at hand – and to allow them to meet with this person freely (assuming reasonable fictional circumstances, of course). They’re introduced and priced on page 93 of Gold Revised and elaborated on starting on page 377 of the same.

Circles is an Attribute describing how socially connected a character is; it can be used to bring NPCs into play, even if that NPC didn’t exist before the roll. Part of the idea is that your character knows people (and those people know people) so there must be NPCs they can reach out to. We’re not going to list out who all those people could possibly be, so instead, we have the Circles ability that can be rolled for generating these characters. This system is introduced on page 97 and elaborated upon on page 378. One way to use this system for your ends is through your control (as the GM) to Say Yes to tests instead of calling for dice rolls (pg 72) – “Oh man, I can’t face those Orcs alone! Maybe I have a cousin who’d a mercenary I can reach out to?” “Yeah, don’t bother rolling, where do you meet your cousin and what’s their name?” – and your control of the consequences of failing such a test to allow the player to find an ally regardless of whether they succeed or fail – “Ah, a cousin who’s a mercenary. Sure, Test Circles Ob 2. If you fail, he’ll have problems of his own he’ll need you to bail him out of after you guys confront those Orcs.”

Page 38 of the Codex has Resource Hacks, and discusses the idea of giving players extra resource points as needed. For one-on-one games, I like to give the player 3pts that have to be spent on buying a helpful relationship – that’s just enough to buy a minor relationship with a close family member, or complicated by romance (or a forbidden distant family member, but that can be a tough sell).

Also, an additional question, the book already touched a bit on playing with the number of lifepaths of a character, giving them some artha points at the start and moving the cap of exponents to manage the power level. How would you use these levers to make the one-on-one experience better?

I think these depend on the scale of your game regardless of the number of people playing, honestly. Someone in the 5 to 7 LP range is going to be a leader of men and wield a lot of power (usually – I think they probably should most of the time). So, using that is going to put your one player near the head of the table, so to speak. Playing a 3 or 4 LP character is gonna be better suited “street-level” play. This character is on the ground, in the weeds, scraping to get by.

The exponent caps, I would leave as the are. I even like to drop the Skill caps down to 4 or 5 and put a floor on Stats at 3. Having a 7 in a Stat in this game is a much bigger jump than it may at first seem, due to how Stats tie into so much of the game. It really can make you feel superhuman – which is fine if that’s what your going for. For your first game, though, I’d stick with the caps as they are – at least until you get a feel for how things all fit together. (If you’re playing a low LP human game, especially, you’re not gonna be able to take a 7 in a Stat without gimping your character pretty hard.

I’ll also add that The Apprentice Story – 2 or 3 LP characters playing the Wizard’s Apprentice, the Blacksmiths Apprentice, the Student, the Squire, etc – can make for very rewarding one-on-one games. It can be tricky because the PC often isn’t the fulcrum of the Big Picture (often their mentor is), but if you buy into the personal, slice of life stuff, it can create a grounded, emotionally rich experience – and when the Big Picture does poke its way into your life, it pokes hard, and can radically change your youth’s life just by its very existence.

@Gnosego Thank you. That’s honestly some incredibly helpfup answers and this gives me a great insight on how to approach it. I think a one-on-one will be fun and will be an easy way to learn the game before jumping to a group.

Thank you. I really appreciate it!

Hey, I’m glad to help! Let us all know how it goes!

I’ll probably have a few dozen questions once I finish reading the book though. You’ll hear of me again I’m sure XD

Wonderful! Looking forward to it!

My advice in one on one games is to start with a fairly underpowered character. You will progress extremely quickly, because you’ll be rolling about two or three times as often as you might if you had other players. Any story with an aspect of learning or self improvement is very well suited to the format (If you can, have a look at the fighting styles in the new BW Anthology)

Would tweaking the number of tests required to advance be a possibility to slow down advancement?

I would leave that stuff as is. Advancing too quickly only becomes an issue in two cases in my experience: Either the GM is calling for or allowing meaningless tests, or the player is being allowed to test a Skill for stuff the skill is not meant to cover.

I say definitely give the system a spin as is.

Is there a reason you’re interested in slowing down advancement?

A great example of 1-1 game is this thread : https://forum.rpg.net/index.php?threads/burning-wheel-Ölruns-journey.696187
It helped me quite a bit to get a hand of the system and convinced me it really shines on 1-1 games. Enjoy !

Thank you. I will diligently go through that actual play. I’m sure it’ll help me! I’ve been slowly trudging through the two books. I’m both excited and overwhelmed by Burning Wheel!

I’m both excited and overwhelmed by Burning Wheel!

BW can be vastly exciting because it does a lot of things other systems don’t do properly or at all (my personal favourite is proper social conflict mechanics). However, all that lovely goodness can make it overwhelming. So, my suggestion is to embrace drip-feeding it: start with the hub, then add the extra mechanics one at a time. 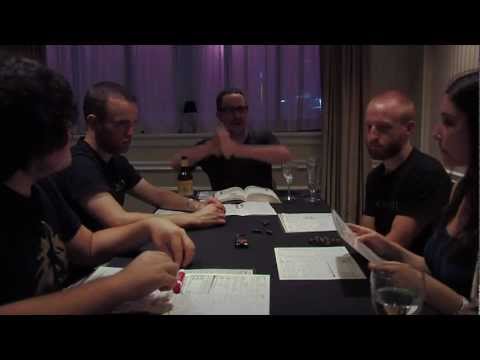 I found this demo very helpful when I was trying to wrap my head around the system.