Can these jewels be useful?

So, years ago, I bought these at some con - probably either PAX or ECCC - back in the days when I still thought I wanted to play D&D or M:TG or some shit. 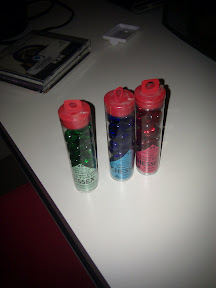 I could just get rid of them, but… I kinda like 'em. (They’re shiny, ok?) So I was hoping maybe you guys could help me brainstorm some legit uses for them at the table for use in Burning Wheel? One example I thought of (or read somewhere) is using them to represent the three types of artha.

Artha was my first thought, before I even finished reading the post. It does give an immediacy to artha gain. If you use them, I would consider giving artha immediately when it’s earned, to keep that sense of agency up.

Those jewels are a clear sign that it’s time to play Dwarves. Put them all in a pile in front of the richest player (or GM if a rich NPC is present) and watch the greed happen.

Scratch my reply. If those were used as props/counters for Resources in a dwarf campaign I’d be playing up Greed like no other.

I definitely second the vote for artha. I’ve used poker chips for artha in my games and it definitely adds a level of engagement to using the system when it’s more tangible than a number on a sheet. I’m a big fan of prop usage in general. We usually did artha at end of session rather than during, and I still found it more effective than using paper. I can only imagine it would be better still being given out on the fly.

To represent “fate points” of any kind, I use Go-Stop cards. Go-Stop is a Korean game that uses small, thick plastic cards with quite beautiful flower pictures on them. The imagery is abstract enough to be ambiguous, yet evocative enough to make them feel like something special your character has. Plus, they’re really fun to slam down on the table when you use them; they’re so thick that they make a very satisfying smacking sound.

It’s kinda funny, actually. None of us foreigners know how to play the Go-Stop game itself, yet there are a lot of us now that use them as RPG props. Lol…

Body of Argument in Duel of Wits, subtracting the jewelry as BoA is lost.

Is there a mage?

Print a bigger Wheel of Magic of Spell Failure

Place the jewels on the actual elements and change their possition according to upcoming dices result.