I’m going to be doing a small run of custom cards for the various stocks in torchbearer. I just like the idea of early on having some nice references for new players.

My thoughts so far:

My main idea is that you can lay the cards out for the levels you currently have, the chosen perks being face-up. For new players this is just a nice reference to have in front of you during play.

Open to suggestions, and will hopefully be done in a month or so. I’m anticipating the cost per-deck to be around$40 USD (+120 cards). I’m going to be stealing art off of google for now, but I plan on temporarily buying a license to an AI art generator and seeing if I can describe some concept art properly. 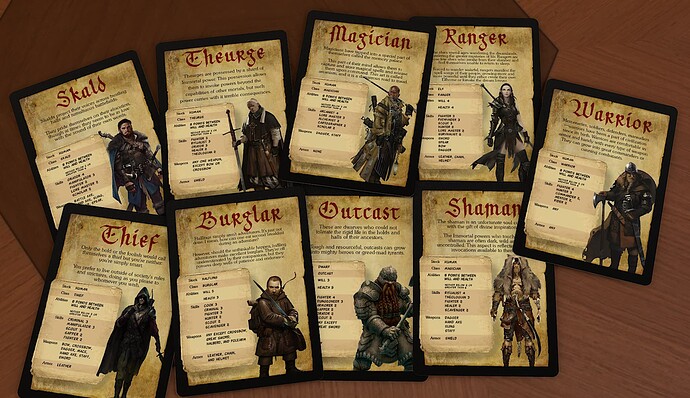 uploading what I have so far, really just brainstorming a card-back today and made some minor edits to the stock fronts. not sure if I should signify that it’s a character card on the back… also adding some of the branding to make it look legit, even if it isn’t. I can upload the gimp project files, too (they’re just big). DM me if anybody wants them.

I noticed that I missed the trait for the stock, too… also should have written down the artist names to credit them… i’ll do it later. 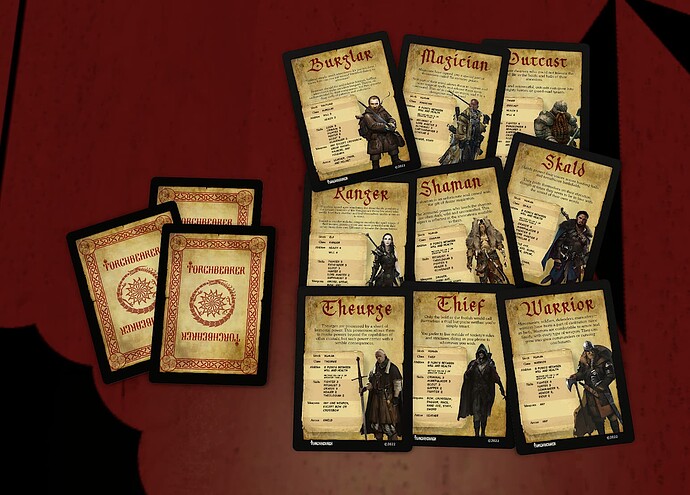 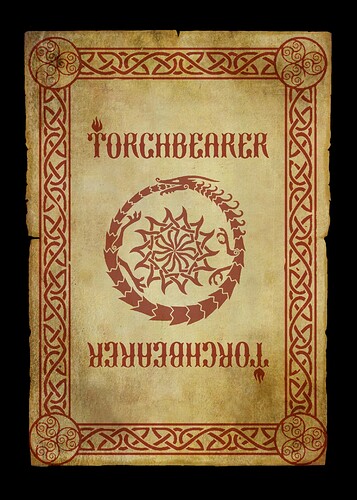 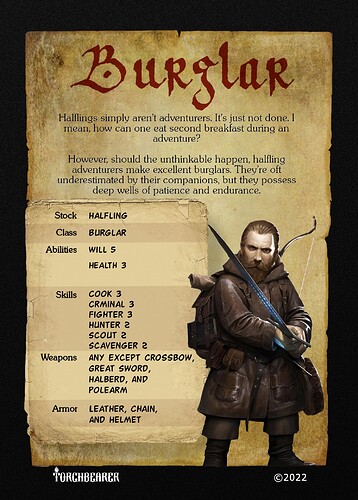 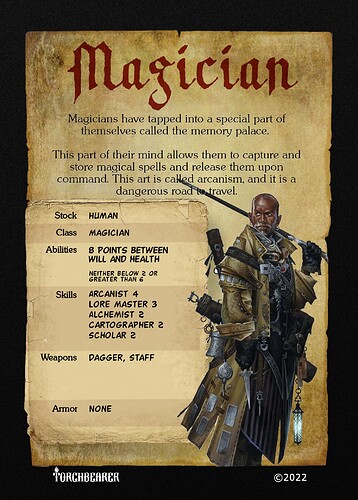 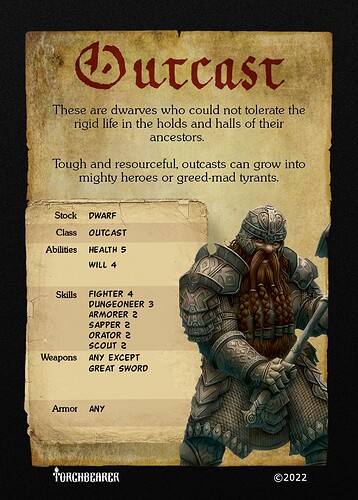 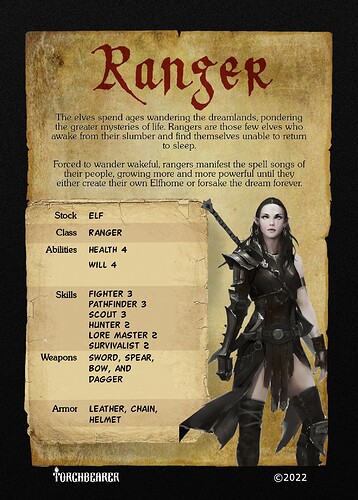 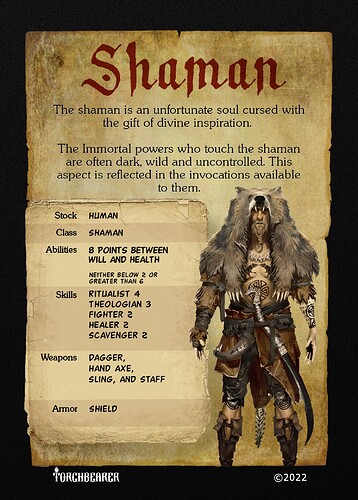 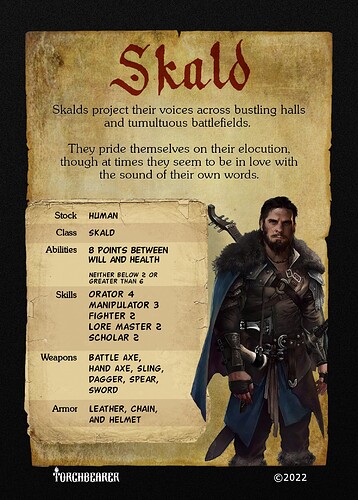 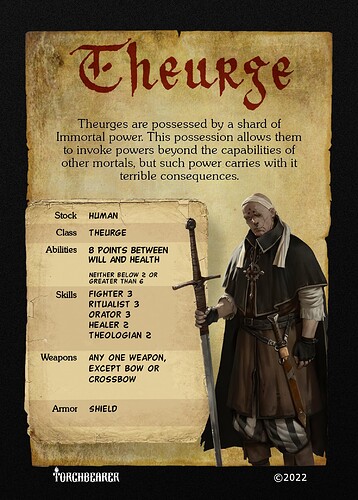 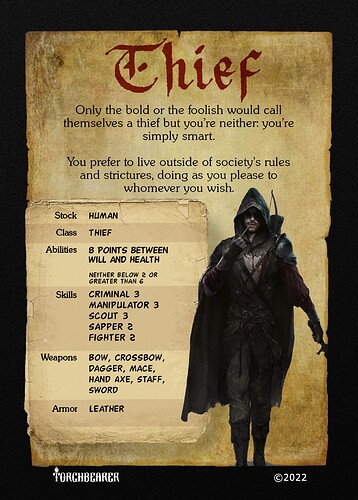 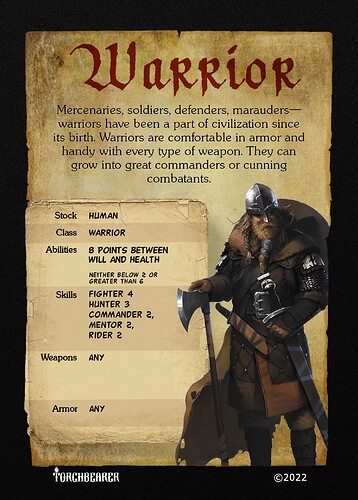 I should mention that I’m using https://www.makeplayingcards.com/

I’m printing standard 63x88mm playing cards with their S33 finish (which comes out feeling like MTG cards). im currently planning on 144 cards in the deck, gonna fill with other shit but not sure yet.

I’m realizing now that the listed skills are merely examples, and that I should state that on the card or remove them entirely.

Also, I’m thinking that the extra slots in the deck can be used to implement some sort of character-creation walkthrough.

I’ve finished the template for the level 1 thru 10 cards. Each side has one of the level benefits. I may end up changing the titles to a format like Level 1a and Level 1b. I’m considering adding more concept art for each card, but it’s a lot of work to upscale and edit them.

I’ve started working on a replacement for some parts of the character sheet. Big picture idea is to have cards with spots to place dice to keep track of anything that changes often like pass/fail and skill levels.

Just brainstorming, but here’s a card for keeping track of raw abilities: 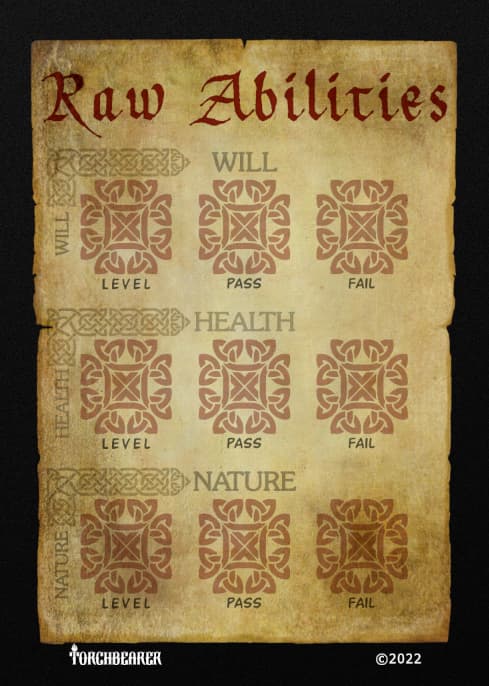 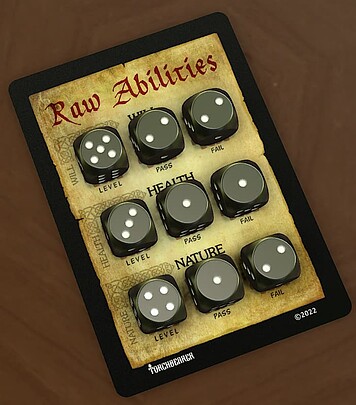 This was designed for 12mm dice, but I’m realizing that I may want to have a spot for taxed nature and this would require 10mm dice if I wanted to fit 4 on a card. There are even smaller d6 which could be used to put raw + town abilities on a single card, but this might be a pain in the ass to handle. I’m still figuring out what feels nice, and I’ll likely need to fuck this up the first time and make a second pass.

Mount it to foam core (with channels cut into it) so the dice don’t slide around?

That would be neat. Any recommendations for someone that provides that service? I don’t want it to look like it was done by hand

If you really wanted to go all-in, then you could probably commission someone to CNC or laser cut a die holder. Or even 3d printed! We do live in the future after all. I don’t know anyone personally — Thor could probably chime in with the person/company that made the Torchbearer coin holder.

I would be interested in knowing where the card/coin holders were fabricated. @Thor

UPDATE: I’m still working on these cards, but I’ve also started working on a map for my first campaign, as well.

Hi there. Luke is the one to ask about details of the vendors we worked with to produce 2e. I believe it was a vendor recommended by AdMagic.