Hi! I just got the book in the mail today, although I’ve been playing in Dean’s campaign for three sessions now. I had a couple questions about Fight that had occurred to me thinking about things that happened in game, so I looked them up and answered most of them, but I have a couple remaining. Here’s a little scenario to illustrate my understanding at the moment…

Clyde the carter and his wife, Esther, have a serious marital dispute and they bring it before a judge. The cruel judge declares that they must resolve the dispute in trial by combat. Of course, neither Clyde nor Esther have any combat skills. Nevertheless, somebody digs a hole for Clyde to stand in and gives him a cudgel. Esther is given a rock tied into her bridal veil with which to bash Clyde’s head in. (This is from the Medieval Fight Book documentary, which is great, btw!) 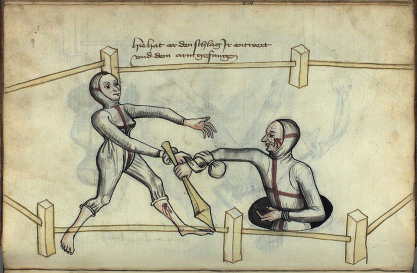 I’ll say the pointy cudgel is a club (short) and the bridal veil with rock is a flail (long). There’s no Flail skill in the book. I guess I could either let you use it with Mace or else just add Flail as an Appropriate Weapon skill. Same issue if you decide to include Klingon bat’leths in your game.

First, engagement. Clyde is stuck with Let 'em Come, since he’s standing in a hole. Esther rolls Speed, with +1D for her longer weapon, and if she scores at least one success she has advantage. If she scores 0 successes I guess it would still count as a tie and she has the longer weapon, so she’d still have advantage. Clyde is going to have +1 Ob to any actions except Defense actions. I’ll further rule that as he’s stuck in a hole, Clyde will suffer +2 Ob to Avoid.

In the first volley Esther strikes and Clyde blocks. This is a versus test, but they’re both unskilled. Esther rolls her Agility and scores 2 successes. Clyde rolls his Agility (with no penalty) and scores 1 success. Now how do I rule this? According to “Fighting Skills - Unskilled” on page 439, in versus test actions you must generate two successes for each one of your opponent’s successes. So to block Esther’s strike, Clyde needs 4 successes? Or to strike through Clyde’s block, Esther needs 2 successes? Or 3, so she has more than him? Do I just double all the dice involved, so Esther has 4 successes and Clyde has 2, meaning Esther hits by a margin of 2 instead of 1? If Clyde had hesitated instead of attempting to block, Esther would have only barely succeeded at Ob2, with no extra success to move the blow to his head or whatever. Probably the best solution is to take it that this is a stat being tested against a stat and not double anything, since they’re both using Beginner’s Luck.

If Clyde had done a few summers with the militia and had opened his Cudgel skill then his one success on Block would be doubled. Esther would need three successes to score a hit.

If Clyde had never opened Cudgel but Esther, in preparation for her divorce proceedings, had trained extensively with bridal veils and rocks and had opened her Flail skill, her attack successes would be doubled against Clyde’s block? This is where it gets weird. Her 2 successes would become 4, beating Clyde’s block by 3 and giving her an add so she can score a Mark hit. If Clyde had just stood and drooled instead of trying to protect his head, Esther’s attack would have had only 2 successes against Ob 1, giving her no add and Clyde would take only an incidental hit. Is this right? Unskilled combatants should stay away from the Block maneuver for fear of making things worse?

So I’m curious to check my assumptions.

So I’m curious to check my assumptions.

Hi Ten. You got the book! Yay!

For the purposes of our campaign, we’ll use one of weapon stats on this page for flails. I’ll think about which ones to use. Most flails would use the Mace skill. There is no Flail skill, unless you really want to specialize.

Going by my own training with nunchuku, I do feel the optional DoF rule to avoid hitting yourself should be applicable. A relevant training skill would cancel the DoF rule.

Also, if you guys ever meet up with the Polynesian-inspired east coast culture in our setting, I’ll introduce variant weapon stats for nunchuku. Martial nunchuks are deadly.