I tried to figure out through which elements M&M motivates the player to act. I began with thinking about what is left of the game when it is striped down to the core mechanics, and I found three distinct elements that influence the player’ behaviour.

1. Lifepaths
Through Lifepaths a character’s agency is directly influenced. How the player should play the character is defined by the experience conditions of the lifepaths. Not only are they necessary for level ups, ability advancement and skill advancement, but they’re also needed to lower the impact of the mortal coil, since upon completion of a lifepath, you gain extra years of life.

2. Obligations
These are direct incentives, the whole reason why your character isn’t just a peasant, a trader or noble as every one else. You need to pay taxes, debts and help your dependents out. Sure, you can get really lucky and don’t have any pressure here, that’s just part of the randomness, but most players aren’t that lucky and get pushed into adventuring by this element. It is crucial for the game and any hack of M&M should involve such an element.
3. Mentalities
Mentalities give an indirect incentive to the player. They advancement isn’t crucial for the player to achieve something, but they are none the less very helpful. This is in contrast to the advancement of lifepaths which are much more valuable and by definition necessary to achieve something in the game, since they very much define your capability to interact with the world. Mentalities, on the other handy, act very much in the way in the way of carrots on a stick: by pursuing their advancement, you move through the game world and learn something new. If you don’t do it, you won’t die, but if you do it, you gains something.

I made a mind map to visualize this. Do you have any comments on this? 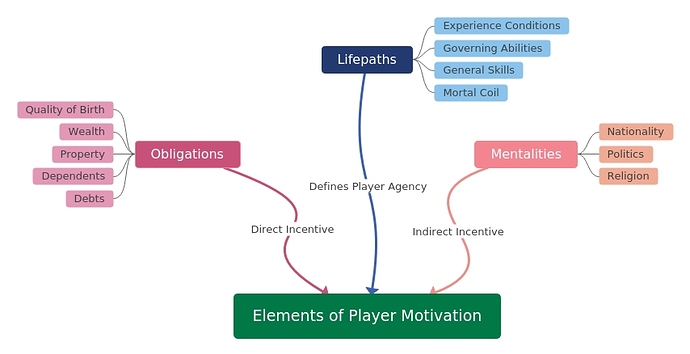