Torchbearer has been a real eye-opener in helping me appreciate the dungeon crawl format. After reading through the rulebook I decided to check out a few modules by Dungeon Crawl Classics. The cover art for “The One Who Watches from Below” sold me on purchasing the module from DriveThru. 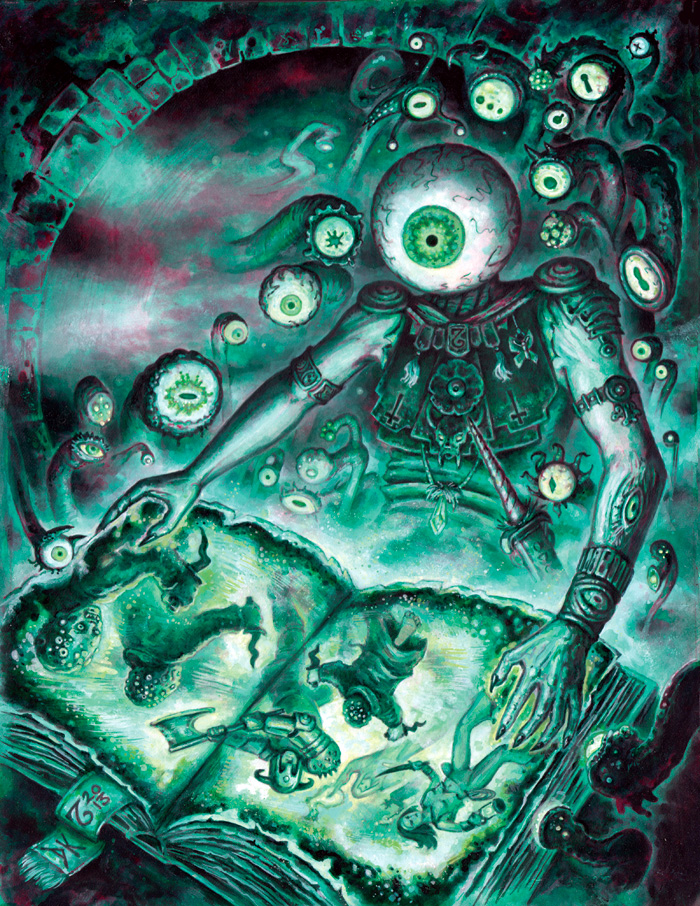 Cool, right? Scaled down I think it would make an excellent Torchbearer adventure.

The gimmick that sold me on the module is a particular curse. It causes the afflicted PC’s eyes to slither down their body and onto the floors / walls / surrounding surfaces. The PC’s body enters a catatonic state, but he can send his eyes to scout rooms, etc. This offers roleplaying opportunities in that the player can ONLY communicate with other players by blinking or other eye movements, or by spelling out words as the PC’s eyes move along a wall, etc. The PC’s eyes can also slither onto the body of another creature and take possession of it–for a price. But that way the player still can participate in combat and come up with some really clever strategies. The party would then need to find the curing ritual on top of collecting treasure and staying alive, and they’d have the added burden of protecting the catatonic PCs.

Obviously the curse is rather complex. Any suggestions on putting Torchbearer rules to something like this? The puppeteering of ‘vessel’ creatures seems like a whole separate challenge, too.

Rather than ripping off the creatures in the module, I wanted to provide a few generic eyeball-themed monsters for everyone by way of saying hello and introducing myself (first post and such).

These are the spies and saboteurs of the House of a Thousand Eyes. They appear to be normal men, dwarves, and the like, save for their skeletal frames and for the distended, tumorous growths budding from their flesh. Once a victim has been cornered, these growths blink open to reveal huge, glaring eyes.

Instinct: Unearth dark secrets
Special: A successful Attack or Feint with the Vampiric Gaze weapon forces the target to make a Health test with an obstacle equal to the glimpse’s margin of success. Recommended failure result: condition (afraid) or twist (the target is blinded for remainder of this turn). When an especially promising initiate survives the ritual to become a glimpse, the House often gifts him with a weapon of cold iron.

These eyes have been plucked from the heads of recruits who died from the transformation process to become a glimpse. A foul pickling process delays the onset of rot, while unholy rituals infuse the eyes with a semblance of sapience. They haunt the House’s secret strongholds and spy upon its members as equally as its enemies. The sentries share their sight with one another and with their overseers.

Drive Off: 3
Weapons
None

Instinct: Always watch unseen.
Special: Some unfettered sentries can see in the dark.

Instinct: Absorb eyes to steal memories
Special: A convergence requires extreme cold to survive. It naturally shrouds its lair in a poisonous, freezing fog: the dead condition can be applied after exhausted, injured, or sick are applied. The slime generated by the convergence contains a natural antifreeze. If an alarm is sounded, the glimpses will drink the slime to avoid the negative effects of the fog and then release the convergence from its stasis tank, allowing it to fill the dungeon with fog.

I just want to give a thumbs up! So cool!