Continued from this thread.

We had our first session of Nara and the Burning Wheel. It was lovely to play in a setting that we have spent 18 sessions fleshing out.

The Situation for this third book holds the least eminent danger. The next arch-mage is being chosen and (back in the first book) Nara, Bina’s daughter, was prophesied to become the Arch-Mage.

It felt like Bina was a challenging character to play, very non-traditional and really meant lots of failed die rolls, difficult for both Sean and I. Pellara was immensely powerful. Sean pushed her Greed to its limits and 9 sessions probably weren’t enough to see that cycle really have teeth. It was still really fun and the fear of going to 10 Greed was still on Sean’s mind but Greed is a brutally useful Emotional Stat.

Nara feels like she’ll right in the middle, kind of perfect. We’re using Art Magic from the Codex. I’m excited to see Nara seek out training and books. 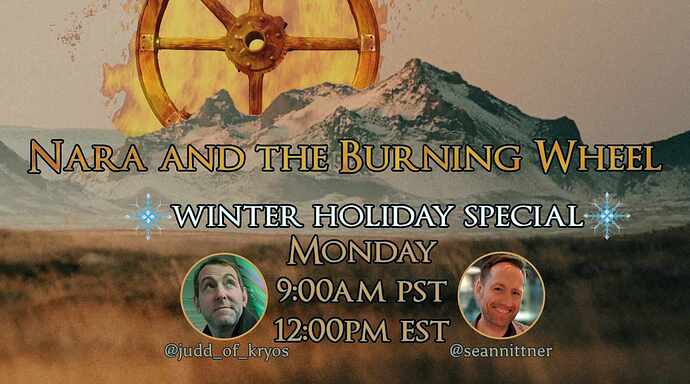 This game has been so good. And one thing I love about starting with a less urgent situation is that there is time for some wonderment and exploration.