Hi all I thought I would share my gaming aids projects

Hi all, I’m new to the site. Our local mouse guard GM joined the navy, and I was wanting to get back into the game. I was lucky enough to find a copy of the boxset at my local game store so I got it at retail price. I am amazed with the quality of the boxset. The cards are great and the dice are fantastic. Being a fan of the comic book the map and the Mouse tokens were awesome to have. But I decided to make more things, well three things.

The first thing i made was a dice rolling tray 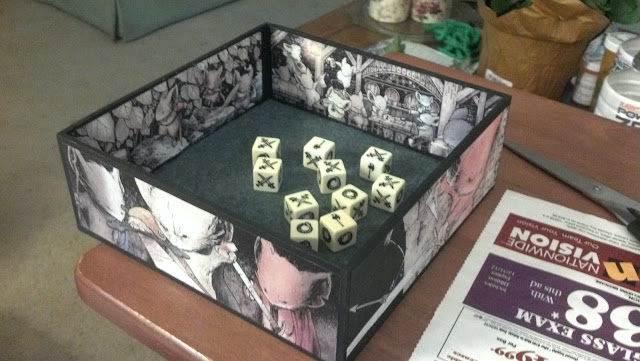 The 2nd thing I made was a Random event deck of cards, I am planning of useing them as Ref cards and when i need to mix things up i can shuffle them and have something random happen. 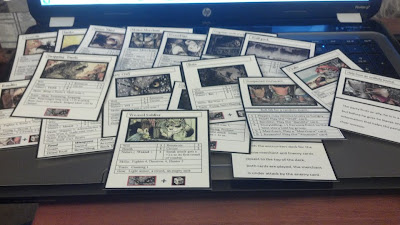 And the last thing is I like have minis in my RPG but buying everything thing i would need would cost allot of money and the models would only be useful for me for this one game so I rethought through my problum and made these tokens, I can use them like models but a bag of 22 of the wooden discs cost me 3.50 so printing out the photo and a glue stick i get me a token for the RPG. 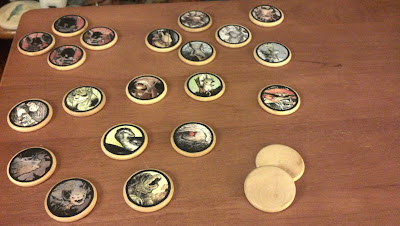 Anyone interested to read more on my projects here is a link to my blog talking about these things,

Anyways I thought I would share my obsession in case there are other players who may be interested in the things i am making. Let me know what you guys think, I am new-ish to GM i have GM some doctor who stuff for my group and take all the advice.

Those are awesome!!! For tokens, maybe you could add some civilian tokens as well.

What kind of events are on those cards? Examples please.

This stuff is amazing, my friend!

I really like the dice rolling tray and the tokens. Both are beautiful. I think I may have to make a tray of my own.
I am however confused about the random event cards. When would you plan on using them? Especially something like the wolf pack card (1 to 5 wolves!)? That is some what insane. Dropping five wolves to top of the party is probably a total party kill if they try and fight. If not then are going to spend the next several sessions dealing with the wolf pack that crossed the scent barrier.
Mouse Guard (at least to me) is the kind of game where each twist (probably the time you would use the card) should challenge the players, but not overwhelm them. I generally try to target each twist at one of the party’s BIGs, and I just do not find that random events do that.

What kind of events are on those cards? Examples please.

here are the pages of my cards I made so far,

There are four major card types in the deck i’m making, Enemy cards, Friendly cards, Event cards and location cards. The last three are self explanatory here is is a brake down of an enemy card.

Uncle Deadly,
I agree, to tell the truth I made the wolf card because if found that cool photo and the card was easy to make. I expect players to use only the cards that make sense for there missions and campaign there working on. For me I make a mental GM note on weather or not my party can handle the cards I draw, I see them as suggestions and not set in stone, oh you rolled 5 wolves well before you tell the players you decided that one is enough and its not hungry its just lost and just walking by. It might turn into a sub plot of not dealing with the wolf but hiding from them as it walks on by and figuring out what is wrong with the sent barrier. But like you said that could be a whole mission to itself. So i think each GM that wants to use my cards or cards of there own need to sort out what there mice could find that would not derail the mission.

For me the cards are there for when i need something to happen and cant think of anything in a quick manor, oh a random bandit camp, or a merchant under attack from a owl. It also gives the players the feel that anything could happen. My missions are going to be really open ended. I will start with a problem with 2 or 3 major solutions to the problem each path has sub plots and some might dead end if the party fails and so they must take on another aspect of the quest and continue.

So the players start off with three major paths and each will have its own way of finishing it. my players will be allowed to do anything they want, if they want to side step the major quest and go rouge they can, if they have there own idea of how to fix the problem they can attempt to do it. But for me to keep the story open ended i need something to help me as a GM keep up so a random deck for when i needed something seemed like a good idea, i have preset issues and twits if my party follows the main story arc but if they wander i want to have something up my sleeve to trip them up.

But I do agree the wolf card is a bit much and i would most likely not use it unless my party has crossed the sent barrier for some crazy reason.

Squeak Easy- Yeah I really should add some NPC civilians into the mix. My first thought was combat so I went there but if there are NPC there who need to be protected or if its the players turn and there is a brawl or a non-combat combat the tokens may be vary important.

Cheers, and thanks for the thoughts guys!

That make a lot of sense. I have to say I am impressed with your work. I use a slightly different method, in that I prepare a bunch of twists that I want to run and then pick the one I think is most appropriate to the failed roll. But I understand how your method would be cool. What ever works for you.

This is great! I hope you make and share more of these! :3