How to Handle Overland Adventures

An idea for how to handle overland adventures.

Situation
A post-apocalyptic setting. Strange magics abound from the previous world. PCs attempt to gather them to keep them out of the hands of an “evil” cult. PCs live in a huge city surrounded by a protective wall. Outside the wall is the weird and deadly.

Players have agreed that sessions can focus on the internecine politics of the city or adventures outside the city walls.

My idea of how to run the adventures beyond the wall.

Each marker has a listed OB roll modifier for the navigation test to get there. Closer markers have Higher OBs and “Tougher” opposition. Far markers of course take longer to get to and time is at a premium.

Higher Ob to find a closer place seems counter-intuitive: as distance amplifies inaccuracies, my default would be that closer places have a lower Ob.

Your navigation choic combined with mention of time being at a premium combined and opponents being tougher the closer to home feels like you’re trying to put players in a bind between risk-cost and time-cost. If that is your intent, might be more plausible to make the maximum potential value of closer locations lower (to represent other parties from the city being more likely to have scavenged there at some point) and make both navigation and risk proportional to distance; that way, players have a choice between a quicker safer trip that potentially won’t get what they need or a harder longer trip that could turn up something really rare.

Higher Ob to find a closer place seems counter-intuitive: as distance amplifies inaccuracies, my default would be that closer places have a lower Ob.

Agreed, and I struggled with this. The desire is to allow the players to determine/place where their goal object is on the map - and yes closer is faster but harder to get to. I admit to being new at BW, but I don’t see as there is really much of a threat difference? If I put “Barbarians” on a map or “Zombie Horde” it really doesn’t represent a greater threat? Does that make sense? Just typing it out, makes me question that statement.

I’d take it back to Intent, Skill, Consequence for Failure.

There are two different types of navigation test you could do:

As find a place and avoiding trouble on the way are two separate things, might be better to make it a linked test:

If I put “Barbarians” on a map or “Zombie Horde” it really doesn’t represent a greater threat?

Depending on how granular you want to make things, they are threats with different possible responses: for example, Barbarians might be open to negotiation whereas Zombies aren’t, but Barbarians are also more likely to use complex tactics. So, while the risk of dying in combat could be the same, players might favour one over the other depending on where their strengths lie. 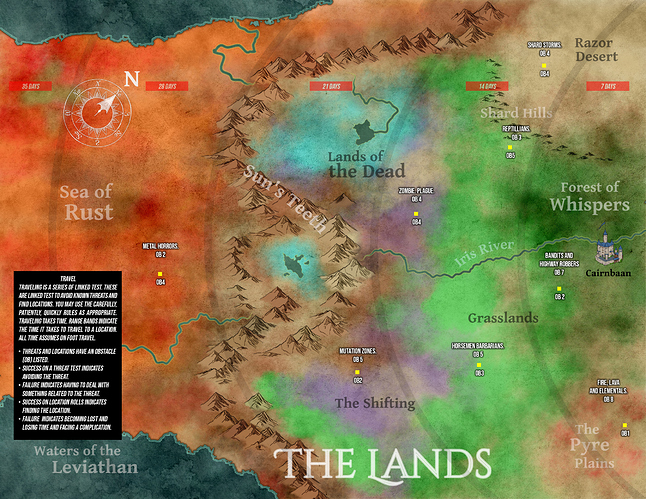 A test map of the idea.

A test map of the idea.

Not sure if you’ve thought of it already, but I assume the information on threats/locations is based on rumours from previous explorers, old records, &c. rather than satellites/scanners/other real-time accurate data; so, one fun complication could be that a more distant threat isn’t what the map says it is. That way, players who tailor their equipment just to solve that potential threat (so they can, for example, free up carrying capacity for loot) are more likely to be caught out.

Yep, based on rumor mill. Good idea on the accuracy of the threat. I might change the language for those to be more vague.