In preparation for future play using this system, I’ve been reading up on the things that will be important for our group to know. We will probably see custom monsters in need of full statblocks, so I’ve looked at the examples in the BWG appendix. There are a few questions I have.

First, and most confusing to me, is how the mortal wound of a creature is listed in two places, and often with two different values. I’m including a screenshot of the wyvern statblock, where the mortal wound is listed as B15 and B11. Based on the forte and power, the 15 value would be the correct one. I see no traits that would affect the value. What’s going on here? 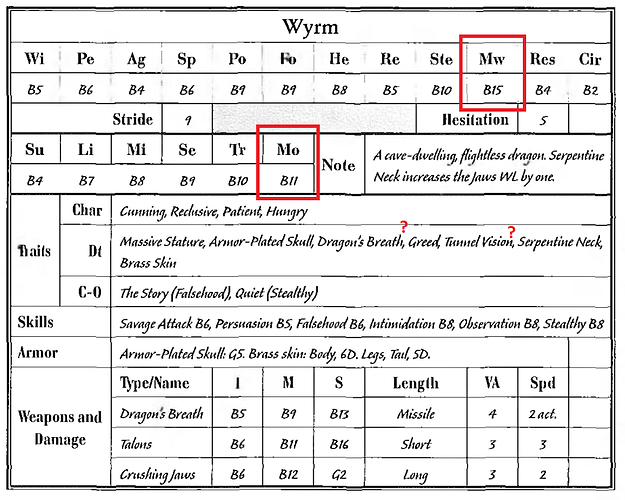 Speaking of traits, there are a number of die traits listed that are not in the book. I assume these are carryovers from the now unavailable monster burner? Are there any ways to read the monster burner now?

Finally, is there an available blank statblock for custom monster creation purposes? I believe I saw a link when looking around that led to the BW wiki, but the link was dead. Especially great would be some sort of digitally fillable version.

Thanks for reading and for answering.

Not sure what’s going on with the multiple/different mortal wounds. Now that’s gonna bug me.

For your second question, things like Armor-Plated Skull and Dragon’s Breath are represented in the armor and weapons description of that monster. Tunnel Vision (and possibly others) are in the Burning Wheel Codex.

(I don’t have anything for blank stat blocks either.)

That PTGS is completely incorrect. You found some honest-to-goodness errata!

Then there is at least nothing I’ve missed, so that’s a relief.
The wyrm isn’t the only one, btw, several of the other example statblocks have similar inconsistencies. I haven’t looked too closely at all of them, but the roden assassin and orc warrior have these misses as well.

I figured some of the traits were self-explanatory in the statblock, but I didn’t notice the ones that were in the Codex. Thanks!

I actually sat down yesterday and created a fillable monster stat block using a google docs table to look like the example blocks. It actually works pretty well for what I want.

I’m slowly in the process of converting the old creature codex from the MB to BWGR’s updated system, but I’m also of the opinion that using traits to represent everything different / interesting about a mob is a bad way of handling it because it means a lot of looking stuff up in the middle of trying to run an encounter.

My plan with my list to to have the stat block as normal but then also include a bullet point list summary and simplification of their most useful powers / traits, that aren’t fully explained by the statblock, and what direct mechanical effects they have.

So in the case of the Wyvern, I’d write something like this:

FYI, don’t throw a Wyvern at the party in the first few sessions. They’ll die

To answer your other question, some of the traits from the MB made it into the Codex, but not all of them.

[Also, worth noting that what I’ve written there isn’t exactly as the Dragon’s Breath trait is written in the MB. I think it’s good to make certain simplifications; partly because certain things have clearly changed—like the fact that this version of dragon’s breath clearly has a VA, whereas the original ignored armour—and partly because the original version took up almost half a page to fully explain itself, and nobody’s got time for that. GMs have got enough on their on their plates already].