I read ~70 guard mice in the book somewhere. I would assume that they are supported by tons of logistics oriented mice that do not count as guard.

I started looking at this link http://www222.pair.com/sjohn/blueroom/demog.htm
about constructing fantasy cities based on Medieval Demographic data.

It takes into account a far larger “country size” though, and above all, a world where the denizens can use open ground to grow, harvest, gather resources, raise animals etc.

In the Territories, mice bond together in settlements to protect themselves from other, larger threats (foremost animals and weather), which means that they can’t quite breed and spread in great numbers. They are constantly kept in check my nature and the threat of the darkheather Weasels.

So.
I started with two main numbers:
70 active Mouse Guards, which seems reasonable since Gwendolyn only has a few patrols out during the winter episode (4 Patrols, with a total of 12 mice, excluding Celanawe, who’s come out of retirement). The rest of the Mouse Guard would rest, or be stationed at guard posts like Calogero, Port Sumac etc)
Say 12 Mice are out on patrol, ca 8-12 are placed at outposts to keep check of the scent border, the western darkheather border etc), and the remaining 46 are resting, healing etc at Lockhaven.
it takes 20,000 mice to wage war on a full-sized Black Bear (something hinted upon in the Spring episode). Taking out such a great threat would basically require most of the mice in the Territories to come together.

I’m unsure on the actual sizes of the cities and villages named on the Territories map, but lets break it down:

There are 36 named locations.
Let’s assume that means we have Lockhaven, and about 5 other, really large cities/strongholds.
A single city might not (should not, for story reasons) be strong enough to wage war on wolves (second largest group) - on their own. Trying to get nearby cities to cooperate - that should be a good element for a story. So a city should not pass 2,000 adult (fighting strength) mice.

Keep in mind that the numbers now are Adults only (no children, and no near-death oldfurs).
I was looking at some posts on Medieval Population Pyramids (http://batintheattic.blogspot.se/2011/07/medieval-population-pyramid.html)
to see how many can be assumed to be in “working age”. The example on that site gave me the number 57%, so in the Territories, that would mean that 57% are the 20,000, and Young and Old mice consist of ca 15,000, giving us a grand total of 35,000 mice all in all.

Let’s return to the cities and settlements:
1 Lockhaven
5 Large Cities
and then we add to that (looking at the map) about 15 Towns…
… and the rest (among them a bunch of unnamed hamlets and smaller settlements) would make up 2/3 of the city total: ca 40.

Let’s go back to the 70 Guard Mice.
They all have Mentors, there are guilds and some families, along with grain storage, hare stalls and huge hives. They also have generals and guards that just keep the walls and entrances safe.
The support mechanism for 70 active Mouse Guards can easily be times ten. 700 active habitants is not an impossible size for the Castle of Lockhaven.
Lockhaven is one of the most secure settlements, but not necessary the largest. The well-meaning of other, nearby Towns is still required.

So, here are some numbers that I felt could work:

In a crisis, the capable old, and the near-adult can be recruited as well, giving an extra 12% (according to the population pyramid).
[ul]
[li] That gives us an additional 4,300 mice that can be mustered for war.
[/li][/ul]

Considering the very rough life of a Guard Mouse, they probably hold ceremony for a handful each winter. Meaning they have to refill with 5 to 10 per year (since they probably hope to grow), and have multiple years in the future, in training by the mentors and guildmice (For example, Navy Seals have up to three years of training before any active assignment: http://www.sealswcc.com/navy-seals-frequently-asked-questions-faq.html#.Vfxl5rTQSDQ).

And not everyone who apply become a Guard Mouse. The trials are probably very cumbersome. (Again, Navy Seals have 200 who goes through training, out of 1000 applicants starting it.)
So say we want 10, then we have 50 applicants.

That’s 1 out of every 380 fighting-age mice. But, I’m assuming they don’t recruit new mice from the entire age spectrum, so let’s head back to the Population Pyramid. 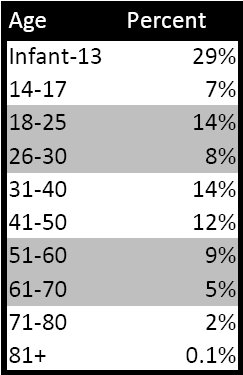 I’m only going ot use the age groups within the 18-30 span.
That’s 22% of the population, or 38% of the adult, fighting-age mice.
That gives us 7900 mice as a Guard Mice application base. That’s one Guard-Mouse wannabe for each 158 applicable mice.
Probably a fairly decent number in a world where most mice don’t dare to leave their homes for threat of horrid deaths.

I hope that can bring up this (very interesting) discussion.
While waiting for any possible “official” numbers.

(Thanks for the split!)

I noticed there were another old thread about this as well, sadly from a few years back.

Above, I went for the fantasy demographics sites, but started thinking of how secluded and small the Mouse towns would have to be, in order to be safe from predators.
They cannot have practically any farming or agriculture outside of their hidden settlements (a tree, rootwallow or cliff etc)

They also cannot be modelled after real mice, since the civilised manner means they’d have more population control (less births) and more space required for crafts, homes, administration and other social infrastructures.

So, to be a bit more precise, numbers are based on what would be interesting from a story perspective (and this is just the right game world for that to have significant meaning):

One thing I hadn’t quite looked at before is that if you look at images of Midnight’s Army, he’s probably managed to muster about 500 Mice. Possibly even as much as 700 (counting dots and looking at formations).

Lockhaven is practically about to fall, except that they manage to block off a major part of the army outside and only get about 30-50 inside.
The rest are attacked by the bee hive, which basically, saves Lockhaven’s hide.

For Midnight to, in secret, muster at least 500 soldiers, is a major feat - something that takes slow recruitment across multiple settlements, and probably have a few years in the making.
Not to mention having loyal Blacksmiths making armour and spears for 500+ soldiers, unnoticed by Gwendolyn’s Patrols and informants.

They’re basically ready to move, once Lockhaven picks up on any kind of suspicion (resulting in Kenzie’s mission for the Fall episode).

I went through a period in 0d&d after reading Dave Arneson’s First Fantasy Campaign where I was keenly interested in demographics. I now call it “RTS” role-playing. Real-Time-Strategy where you are concerned with how many hero units you have, what the yearly take in gold pieces is from the 6 merchant ships you have trading with other ports, calculating a 30% Fyrd of combat age men and extrapolating how big your army is, 1% of those are heroes, 20% of the 1% of heroes are wizards…etc. Basically, every iPhone app money sink “role-playing game” like “age of war” “kingdoms at war” etc.

It’s a lot of number crunching that explains why RTS are enjoyable computer games, because the computer is doing all the number crunching. Narratively, though, it doesn’t matter. Aragorn was able to defeat Sauron at the battle of Pelennor Fields, not because he crunched the numbers on how many “heavy horse” he was able to muster from Rohan, but because he completed the quest that brought the Rohirrim, the number doesn’t matter, the number of Rohirim was exactly the amount necessary for the narrative. Dungeon World does this aspect of war-gaming better than anyone with their (criminally underused) steading rules and steading tags (and I hope Thor is looking at how character quests effect steadings in DW and seeing how that could be used in Torchbearer Expert set). So too, the BW rules provide a similar rules narrative that doesn’t require a player to use a calculator. Calculators were really cool in 1976 so I understand why RPGs leaned heavily on crunching numbers. Math is only cool in the background, behind the program, now though. Algorithms instead of multiplication and division problems.

It is certainly fun to think about demographics, but ultimately, that is a game in itself unrelated, really, to the rules at the table in modern games. That a town has 8,000 people instead of 12,000 people is not an important part of play narratively inso far as the number is or is not necessary for some narrative device.

Opcero - I’d say that for the most part you are right. The numbers aren’t really important in the narrative brought to the players. However, it is good to understand relations.

That’s why I wrote down a couple of statements above. These can be streamlined even more.

Looking at the spring issue there are a few more:

From the winter story we also have:

All of these statements are numberless, but considering the rules have a few technical mentions of the size of mice groups, those numbers then play into these statements and at least set a relationship between the different factors.