One of the PCs in my Burning Deadlands game has a belief about documenting the weird new species that have appeared since 1863 to win the recognition of the National Geographic Society, so I whipped up this bad girl to come down the Platte to Denver. I anticipate that PCs won’t be in too much danger if they encounter it in a well-armed group, but lone characters and pairs will be in deep trouble!

Comments and criticism are very welcome!

Concept: a 15’ electric catfish from B-movies that can crawl on land like a mudskipper.

Hook: People go missing in a river when they go to bathe or wash clothes. Dead fish are found washed up on the riverbanks near the sites of the disappearances. People won’t go in the river any more, and even so, they’re snatched from the banks. When the thunderfish is finally hauled in and gutted, it’s discovered (in true B-movie style) that she recently laid eggs.

Or the thunderfish could swallow an NPC with an important MacGuffin, perhaps right in front of the PCs’ eyes, and bear it away down the river in its belly. Perhaps the thunderfish is caught by men of another race, tribe, or nation and now the PCs must negotiate with them to win back their important thingy.

Instincts: Lie in wait where prey often comes. Stun them, grab them in my maw, swallow them, go hide to digest. Flee if wounds start stacking up.

Skills
Stealth B5
Foraging B3
Hunting B4
Brawling G4
Climbing G3
River-wise: B3

Armor/Natural Defenses
Armor 2 all over

Amphibious: this creature can breathe both air and water.

Gigantic: the thunderfish averages 15’ in length and weighs around 2000 lbs. It can consume prey up to the size of a human or deer.

Electric Discharge: by spending two actions in Fight! or a single action outside Fight!, the thunderfish can release a powerful electric shock from its body. In the water this will affect everything within ten paces. On land, it will cause a bolt of electricity to arc from its body to a single target. Treat the Discharge as Longest (spear) for positioning. The bolt hits automatically and damage is determined by the DoF. The target must also roll Forte vs the thunderfish. If the target loses, he will stand and drool for a number of actions equal to the MoF. Win or lose, if the thunderfish rolls any 1s on the Forte test its Forte is taxed 1 point. Forte returns at the rate of 1 per hour of rest.

I used this monster in the game today. First one of the characters, walking home drunk at night, saw two drunk prospectors horsing around in the shallows of the river. Suddenly they stiffened and collapsed in the water, then one was pulled under by something large and the other floated down the river. The PC pulled the floater out, and noticed dead fish floating with him. The man came around and ran up and down the river, calling for his friend, and the PC left him to it and went home to sleep off his intoxication. The next day he told the other PCs, and the naturalist resolved to catch the monster.

He had a mostly clever plan that obliged me to make a lot of judgement calls I felt a little fuzzy on. He prepared capsules of morphine, using a whole bottle of morphine, and attached them to a dog at the end of a long rope. Then he threw sticks for the dog to make it run into the water repeatedly. When the dog tired of that game he took to carrying the poor thing onto a bridge and tossing it off into the river every fifteen minutes or so. I let him do this for a couple days, and then on the fourth day the thunderfish took the bait, literally, and stunned the dog, then tried to swallow it. I had the naturalist test Knots, Ob3, to see if the rope would hold (he’d tied the other end to a pylon). The consequence of failure would have been that he’d lose the dog and the morphine for no gain. He succeeded the check and the rope held, but there was no hook in the bait, so I decided the fish would release the dog when it couldn’t make off with it.

I wasn’t sure how a bottle of morphine would affect a 2000 lb. fish, but I decided to have a quick melee. The PC didn’t know how big the thing was when he prepared his trap, and he doesn’t know anything about fish physiology, so I decided by fiat that the fish wouldn’t be affected by the morphine for at least several minutes and the PCs hadn’t done anything to help them track the fish once it went underwater. They anticipated that the fish would float to the surface, but I read on wikipedia that catfish, as bottom-feeders, are denser than water with heavy skulls and will naturally sink to the bottom.

I wanted to keep things exciting, though, so I had the distressed fish come up on land where it sensed more movement and waddle toward two of the PCs. The PCs tried to give ground and stay away from it, so we tested opposed Speed. The fish rolled 2D (3 Speed, -1D for Clumsy Walker) and got 2 successes. One of the PCs, despite having six dice to roll (4 Speed, +2 for stride 4 points higher), only rolled 1 success! He slipped on the bank and the fish charged up to him. The other PCs already had their guns out and engaged the fish at Missile range.

In the first exchange the fish took a superficial wound from a shotgun blast but stunned the naturalist with an electrical discharge and knocked him down. Despite everyone blazing away at the fish, nobody managed to land a telling hit. In the first volley of the second exchange one PC nailed the fish with a superb hit and it failed its Steel roll miserably, electing to flee back to the river before it could cram anyone into its maw. The PCs kept firing at it with their guns but couldn’t land any telling hits, and I ruled that without any way to follow it or shoot it once it slipped under the river they couldn’t prevent the fish from disengaging.

Overall, I was pretty happy with the engagement. The naturalist has written a new belief about “catching the one that got away,” and the preacher-turned-gunslinger wrote one about killing the monster to make way for civilization. I felt a bit heavy-handed in ignoring the morphine, but they didn’t know they were up against a catfish or that the fish would sink to the bottom when unconscious. Hopefully it will lead to a good chase next session.

And the dog survived!

Glad to see that no canines were harmed in the making of this adventure.

Have you ever looked at Alligator Gar? They are astoundingly beautiful, huge ancient fish with armour plaining. Stories exist of them being caught by early US fishermen up to 14’ length.

That’s kinda fun, I like it. It’s scary, but not really that dangerous. Seems like an ideal sort of monster to toss at a low-powered party that’s just failed Navigation or Orienteering. I will use this!

Just to confirm, the electricity provokes a Forte vs. Forte test? I like how that works with the Thunderfish’s Forte tax.

It would be handy if you could mark which traits are C-O and Die traits… so much flippage!

What were the intent and task with the morphine-dog? Maybe die-of-fate to see if morphine affected the fish (or an ob 2-3 on monster-fish-wise, or legend-wise, or what have you).

That’s kinda fun, I like it. It’s scary, but not really that dangerous. Seems like an ideal sort of monster to toss at a low-powered party that’s just failed Navigation or Orienteering. I will use this!

Just to confirm, the electricity provokes a Forte vs. Forte test? I like how that works with the Thunderfish’s Forte tax.

It would be handy if you could mark which traits are C-O and Die traits… so much flippage!

Yes, it’s Forte vs. Forte, and can tax the fish, but only 1 point per discharge. I’ll mark the C-Os… I wasn’t sure how much I can write about what traits in the MonBu do.

What were the intent and task with the morphine-dog? Maybe die-of-fate to see if morphine affected the fish (or an ob 2-3 on monster-fish-wise, or legend-wise, or what have you).

The intent was to cause the fish to lose consciousness and float to the surface so that it could be captured alive and studied, but the character didn’t even have a description. He thought it was probably a giant electric eel, based on the account from the witness. He has the Apothecary skill, so I probably should have had him roll Apothecary against a high Ob to dose a giant fish correctly. Monster fish-wise would have been good, too.

Looks like a fun monster! I think I would have given it bonus Speed dice for water-based movement though, not only a Stride advantage. Maybe even grey shade. Otherwise, too easy for people to swim away (if they avoid or survive the electric shock somehow, that is).

Well, that did make me wonder how a human’s speed translates in water.

I suppose their could be a die trait, Icthyoid Body or something that gives +3D to Speed in water?

Right. I was also considering size. The thing is 15 feet long. Usually animals that big are actually quite quick, especially the water-based ones. Look at the blue whale – it’s one of the quickest swimmers in the ocean. Just doesn’t seem that way by just looking at it…

Maybe instead of a bonus to Speed in water I should give it a notably higher Speed, like 5 or 6, and then a massive Speed penalty out of water? Although I think the Stride does make a good difference, since humans get +2D against it. Humans typically roll 6D against the fish’s 2D. In the water the human might roll 4D against the fish’s 5D after Stride adjustments, but that assumes human Speed isn’t penalized at all for being in the water. I know I’d assess an Ob penalty for the human.

Is the peer-review process done? Shall I post the fish on the wiki?

The player playing the naturalist illustrated the fight! 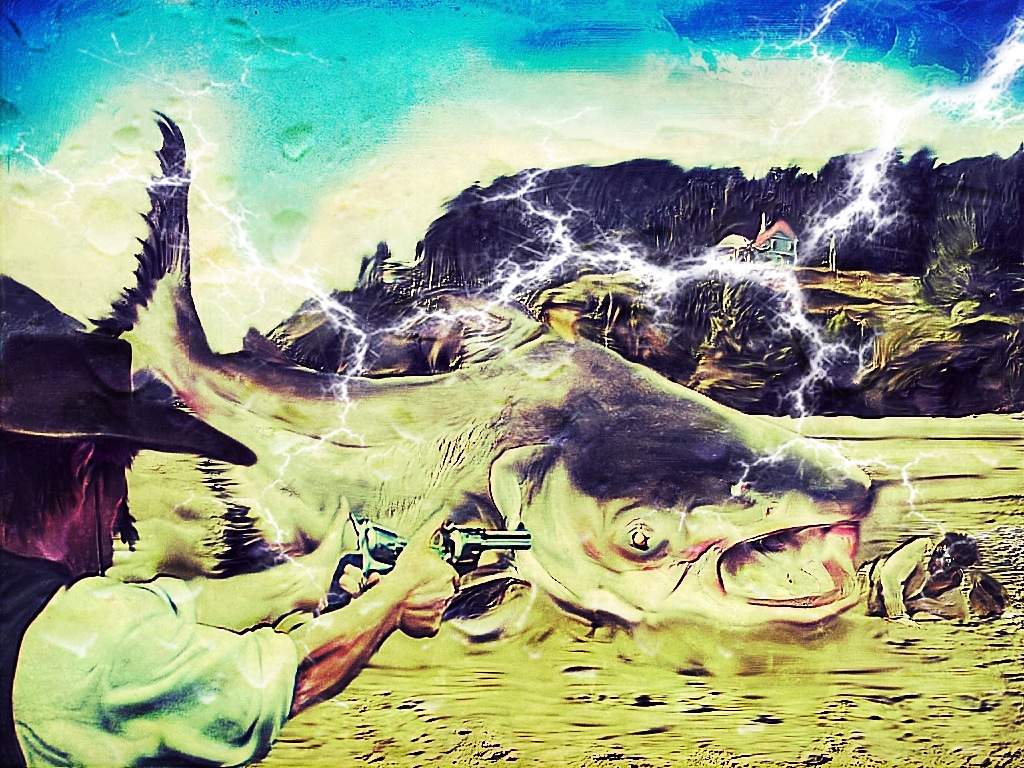 I sooooo would’ve just run away from that thing!

How do you make a picture like that? That’s really strange and cool.

Fuseboy, he mentioned he used the apps Snapseed and PhotoStudioHD.