okay, im the GM in 2 sessions and diving in the deep end. I have read the gold and blue codex books and still cant figure out how to record damage.
So…lets say you have a player with power 4 and weapon power 1. They swing with 5 dice and get 3 successes.
How do you calculate the the gray shade and number of the wound?
Also, do you adjust severity or new would with every hit?

Welcome to the forums!

In Burning Wheel, damage levels are absolute but wound levels are relative. My blade might deal a B3 hit to anyone I strike, but whether that’s a Superficial, Light, or Midi Wound depends on the Physical Tolerances of the person on the other end of the blade.

I might be misreading your post, but it sounds like you’re mistaking the Power+Weapon Power as the dice pool for the attack. Attacks use the relevant Weapon Skill to determine your roll. For instance, a character with 4 Power and a Dagger (+1 WP) but only a B3 in Knives would roll 3 dice on their attack, not 5.

The relevant info for damage will be the IMS (BWGR p 463). With Power 4 and 1 WP from the weapon, your IMS would be 3/5/7. 5 is from the 4Power+1WP, 3 is that number minus half (rounded up), and 7 is that number plus half (rounded down). The Shade of the IMS matches the shade of the Weapon’s power, so even Gray skilled characters need a legendary blade to deal damage in the Gray section of the PTGS. That means that this particular weapon would be deal B3/B5/B7

Meeting the obstacle to hit (1 success by default) allows you to score an Incendental hit (the I from IMS). Additional successes can be spent to move the blow on the body (usually to as less armored location) or on improving the strength of the hit.

This is what the “Add” of the weapon is for. Spend additional success equal to the Add and you will improve the blow from Incidental to Mark (M on the IMS), or from Mark to Superb (S on IMS). By default, weapons have an Add of 2, meaning you need 2 extra success (3 total) to move from I to M, and 2 more successes on top of that (5 total) to move from M to S.

Circling all the way back to your example, with 3 Successes on the roll you would score an Incidental hit (you beat Ob 1!) to deal a B3 wound and could spend the extra 2 Successes to improve that up to a Mark hit of B5. Assuming armor doesn’t ward off the attack, the target of the blow would then mark a hit of B5 on their Tolerances Grayscale and take penalties based how severe that wound is to them.

Alternately, you could try to spend those successes to move the location of the Incidental hit to a more favorable spot. See BWGR p 465 for info on moving hits.

Let me know if any of that doesn’t make sense.

yea, it doesnt make sense. so where does it say 2 successes on my example does a b3 instead of a b2?

i dont need the fancy explanation. just the easy hit and how its calculated per hit to the damage table please.
In another example i had my 2 players wander thru a wilderness in the snow. so decided to see effects as to a wound. Figured the obstacle would be a 8 and had them roll thier forte against that. So…the roll is made, how and where do you find the damage calculations?

yea, it doesnt make sense. so where does it say 2 successes on my example does a b3 instead of a b2?

The first thing you need to do is factor the IMS of the weapon, you can’t determine damage without it. With Power 4 and WP 1, the IMS is 3/5/7 meaning B3 on an Incidental, B5 on a Mark, and B7 on a Superb hit.

In your example, you get three successes which is enough for a B5 hit. The first success gets the hit to land, and the two extra are spent to upgrade from Incidental to Mark.

so okay…have to be specific with the weapon and its IMS thingy. then 1 success gets a incidental, an extra success gets a mark and 2 extra gets a superb? then the next hit starts at 0 again or adds to the wounds.? So what is nature weapon stat then?
also i thought power was the damage type?

so using my nature example how do you determine hits and wounds with the information I gave?
Also using the simple martial confict or bloody vrs test, do the weapon and damage still remain the same, as in pg. 427 under one side hits, both sides hit?

Hi @Jamesbond7, let’s use a dagger as an example, because it has +1 to Weapon Power, as per your example.

So…lets say you have a player with power 4 and weapon power 1.

Sweet, we have a character with B4 Power and a +1 WP dagger now. So we need to calculate the IMS (weapon damage stats) for that dagger. IMS stands for Incidental, Mark, and Superb. Incidental damage is a weak/clumsy hit, Mark damage is a solid hit, and Superb is the kinda stuff that cuts jugular veins, lops off limbs, or KOs a dude.

STEP 1: ON THE CHARACTER SHEET

Cermujin the Old finds a beautiful dagger in a field of corpses. He decides to pocket it for later, and adds it to his inventory. The player flips to the Weapons & Armor section of Cermujin’s character sheet to record the Dagger’s IMS.

We’ll start with Mark. Mark = Character Power + Weapon Power (which is the 5 you were looking at above). We don’t roll it, we just note that Mark damage = B5.

We now have our IMS for your character when they are wielding a dagger: I=B3, M=B5, S=B7. We’ll just fill in the last of the weapon stats because we’ll need ADD in a moment…

Cermujin gets JUMPED by a mugger! He whips out his beautiful dagger and slashes! Unfortunately for the mugger, he didn’t know that Cermujin has a B5 KNIFE SKILL! Cermujin rolls 3 successes against Ob 1! It’s a hit!

But what kind? Cermujin wants to spend ALL of his successes on damage.

But to determine how much damage he can do with his extra 2 successes (Ob 1 - 3 successes = 2 extra), he needs to refer to his ADD!

He’s in luck because Daggers are extremely precise. The lower a weapon’s ADD is, the more easy it is to deal the big hits. ADD is the number of extra successes that must be spent to increase from Incidental to Mark, and from Mark to Superb.

Meeting the Ob 1 automatically means a Incidental hit, so he can deal B3 damage, BUT, he can spend 1 extra success to increase that to a Mark (B5) or 2 extra successes to raise that to a Superb (B7). He spends ALL HIS EXTRA SUCCESSES to deal a B7 wound to his mugger! 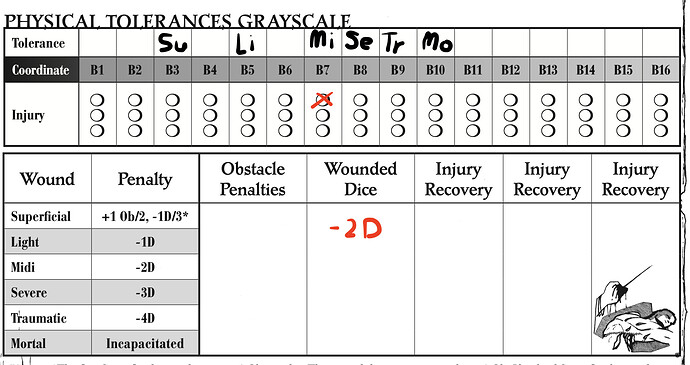 B7 is a Midi wound for the Mugger! He immediately loses 2 Dice from ALL his stats and skills! Notice that if Cermujin had scored less successes, he would have done either a Light Wound (only -1D) or a Superficial wound (only +1 Ob to all tests). But because his Dagger’s ADD is so low, he could make 2 extra successes really count. This fight is pretty much over as soon as it began.

sooo…no matter how many successes you roll, you have to spend fate to raise the wound if there are enough successes? You just cant give a bigger wound on dice successes alone?

Yeah, you can. You spend the successes from the roll to increase the damage. I think your confusion was that you thought that Power is rolled, when it only determines set damage values. Basically, the process is:

Roll skill. Apply successes from roll. Successes determine which damage value you apply as a wound.

You don’t need Fate points to deal more damage, but you can if you want a higher chance of extra successes.

The Add of a weapon is how many successes increases the damage.

If a weapon has add of 2, you need to use 2 successes from the attack roll to increase damage.

Very timely! I’m gearing up for a BW game in a few weeks and I’m slowly rereading the rules. Thanks for the explanation! What a great writeup! Reminds me of stuff I need to reread, or at least, brings those rules back to my mind. Well done!