I was excited to try out the War subsystem and today I finally had the opportunity to try out a couple engagements! It brought up some questions though:

Hey,
Thanks for these!

Cool, that all makes a lot more sense.

I’ll be using an engagement in my actual game Monday and I’ll post here if anything else comes up. My players are relieving a siege, and I’m excited to see how it plays out! Thanks for answering my questions.

The battle last night went great! My players just pulled out a victory against a larger force. I represented the besieged fort on the map in the “field” section and put a garrison unit of archers in there whose doctrine was to never leave the fort undefended, with a tradition to always fire at the enemies closest to the fort.

I have another volley of questions that have come up since I last posted:

I also had a couple things I was curious about that stood out to me in the rules:

Hi Tyler,
I’m relieved and delighted to hear that the battle went well.

Tell us more about your battle, Tyler!
What were the player’s forces?
What was the final disposition? What were the battle results?

I really like your answers to 6 and 8. I would love to see that spelled out more explicitly in a future version of the Anthology! 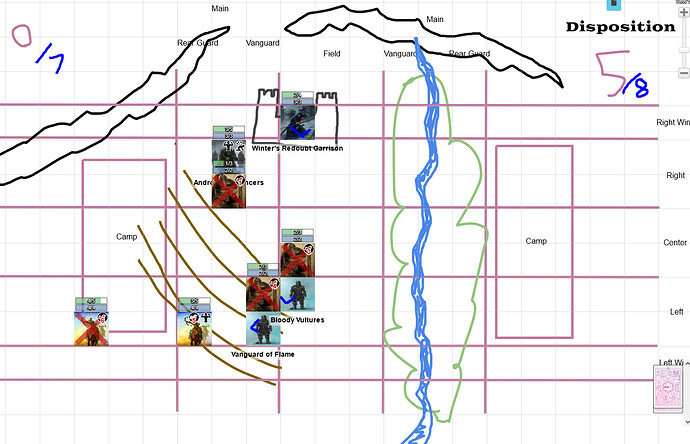 Our current campaign is loosely based on the Night’s Watch from GoT. This fortress of the Watch, Winter’s Redoubt, was surrounded by a force of steppe warriors from beyond the frontier. My players had been scouting it out previously and had gotten a relief force together but their numbers were still below those of the besiegers, so they decided to try an ambush. They failed the rolls to get their army into position in secret, so the enemy had time to prepare for them, though I was probably a little too kind and still gave them the bonus dice to the disposition roll for having units concealed by cover.

The players had 2 units of light infantry–the “Vanguard of Flame” (D: We’ll be remembered in the songs for our great deeds! T: Always be the first to charge into battle), and the “Bloody Vultures” (D: Nothing is worth dying for. T: Never leave loot lying around.)–along with 1 unit of medium cavalry (“Andronikos’ Lancers” D: We have the finest steeds in the Watch, we’ll always prioritize our horses. T: Always face the enemy head-on.) and the garrison archers that I mentioned previously.

They were going up against a force of 4 light infantry units and 2 mounted archer units. At the start of the battle, the players rolled hardly any successes on their Command roll so they charged in with Andronikos’ Lancers (their war captain’s unit) on the right, which was closest to the fort, and the only place where the enemy’s units weren’t protected by a series of trenches. The Lancers fought one round of combat and lost, but were inspired, and spent most of the rest of the battle deadlocked between their Strength + the archers’ volley against the enemy light infantry + volleys from one of the mounted archer units.

At this point the players have 5/8 dispo against the enemy’s 7/7 and they look like they’re going to lose the Lancers as soon as an approaching 2nd enemy light infantry gets near. Feeling confident, the steppe warriors charged forward with the remaining part of their army, abandoning their defenses. Only to be met on the left by the Vanguard of Flame and the Bloody Vultures who routed the 2nd mounted archers and then met the other 2 light infantry units in the middle of the field. The players needed 4 successes on 5 dice to win that clash and they pulled it off! All of this reduced the enemy’s dispo to 1, just as those last light infantry were reaching the Lancers. The Lancers were down 2 Strength but succeeded in the exploitation roll and turned the tables, ending the battle.

In the end, they relieved the fort with only about half of the enemies remaining to escape. It could have gone very differently though if they hadn’t won that one roll in the infantry combat.

That is an excellent tale! Congrats to the victors!

Were the PCs involved? Were they the war captain? The commanders? Heroes?

The Lancers were down 2 Strength

Also, I can’t quite parse this statement. Can you expand on it for me?

Two of the PCs were attached to units in the battle while a third convalesced from a nasty arrow wound back at camp. They’re too low of a rank in the watch right now for it to really make sense for them to lead an army, so instead my players collectively took on the role of Andronikos, the war captain. The unit commanders were other NPCs that they are familiar with.

At one point Dymion, one of the PCs, tried to break a deadlock by challenging an opposing commander to a duel but he didn’t have the Conspicuous skill so he failed the (doubled) Ob 10 Will test.

That gives the Lancers a total Strength of 4 while their enemies were Strength 6.