I would like to revise elements of The Sword which is a Burning Wheel intro session. It might be a bit strange to introduce a central item that all members of the adventuring party are competing to gain. So, I need some advice about adjustments to The Sword which can fit a single-shot Torchbearer session.

Some changes I have in mind already are:

I’m also thinking about ensuring a space for camp near or within the dungeon.

As a single-shot, I’m attempting to present a Try-It-Out experience and want to ensure there are options for adventure phase and camp phase to be thriving portions of the session. I’d like to avoid town phase, but perhaps offer some kind of foreshadow of town phase without a return to adventure afterward. It is just a single-shot.

I prefer to have a lengthy session, but I think I might only schedule 4hrs for the sake of not asking too much of the attendants.

So, I’d welcome some additional comments. After I’ve created the delve, I’ll link here to the public post on my patreon.

item that all members of the adventuring party are competing to gain.

I’m not familiar with The Sword, but are the characters in the party competing against each other? If so, how do you see that working? Not sure if that is what you meant.

On the other hand, having a common goal is a great way to start a campaign. If they were all trying to get the item together that would encourage teamwork and camaraderie. Maybe they are competing against another adventuring party or even against different benefactors to get the item before the other rival.

I like the Sword: it provides a tense situation that pits beliefs against each-other and results in interesting conflict between PCs. It shows off some things that Burning Wheel does really well.

However, Torchbearer isn’t really about challenging beliefs or pitting characters against each-other. In fact, one part of the learning curve of Torchbearer can be how much it expects players to work together (even when their characters are at odds).

When making a Torchbearer scenario, I focus on what Torchbearer does well and design from there: logistics of a dungeon crawl, environmental hazards, interesting monsters.

So, my suggestion would be to set the adventure many years after the conflict of the Sword, assume the worst possible result (duel gone wrong, a terrible curse that could not be undone, etc). Then add an ecosystem of monsters that have moved into the abandoned site in the interim. Let the party uncover the details of the conflict organically, to the extent that they care to investigate.

I strongly agree with @Koch’s suggestion of having a common objective to present to the party, and having conflict come from the environment, monsters, and outside competitors.

ensuring a space for camp near or within the dungeon

A good question to ask for each area on the map is: “How safe is it to camp here?”

If you have a sense for the light level and the danger level for each area, the party could theoretically (with ingenuity and extreme effort) camp in any area on the map. The GM need only have an idea of what level of effort it will take to make camp or to make it so they are able to camp (sometimes nearly impossible).

Now, however, if you are trying to be generous for a new group of players you are introducing to the game, you might reward exploration with an abandoned camp from some long-dead party (or maybe from the rival party). Make ‘em earn it: this camp might be in a secret area or an area behind the “obstacle that is too difficult.” The camp might even have some amenities such as a water source to spur the players’ imagination of what they can do with the space.

I’d recommend to start them right at the door of the dungeon, and that the dungeon have no more than 5 areas if you want to ensure this is a single-shot session.

This is a simple 5-area dungeon map just as an example. I like to start right off with a choice (right or left). Then there is a secret door to reward that eager player that wants to search for secrets all the time. This also gives the group an alternate way back and the feeling like they can explore freely. 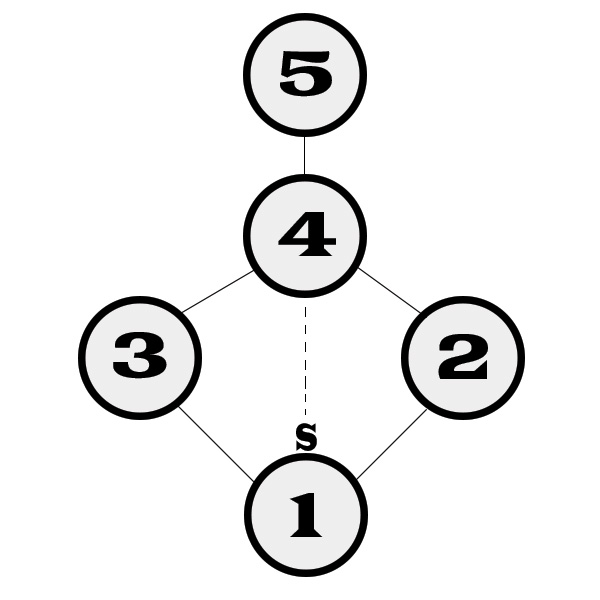 Although, I am reminded of the board game Clank!

In Clank!, players compete to get the treasure and get out of the dungeon before the others.

You could hack TB so there was “light competition.” No PVP but a solo race to get the sword.

The Sword isn’t meant to be a rip-roaring yarn of adventure. It’s meant to create an example scenario in which players new to Burning Wheel learn how to use their Beliefs.

To make it less overtly PVP, you must include a powerful monster (Might 4 or 5) who is guarding the sword.

However, all characters must have goals about the sword in order to make it work—even in Torchbearer—so there will be some friction or conflict once the guardian is defeated. It’s natural and will demonstrate how beliefs and goals work, which is vital to the operation of Torchbearer.

The Sword is a simple introduction session for Burning Wheel in which the pre-gen characters all have distinctly divergent intent with discovery of the legendary sword. In this way, the session opens with the group of adventurers descending a stair and arriving at the chamber with the sword. At that moment, each has a reason to prevent the others from touching it and leaving with it.

In that sense, it is not a good fit for Torchbearer, as the overall session is about internal conflict. However, I feel some interest in creating a few reasons for players to interact with one another in competitive ways rather than exclusively cooperative ways. I’m certain they need one another to arrive at the final chamber, but once acquired, the final outcome of a single resource should spur some divergent ideas. I’m still thinking whether to make that part of the pre-gen characters or part of different leads to this delve.

having a story told of the outcome from some party seeking the sword is a great alternate. I’ve also recently reread Baldwin the Brave and considered ideas from that which may create a really good scenario.

It would be cool to run the Sword for a group (as written) and then return to the site years later (with the same group) in Torchbearer, with only breadcrumbs of clues that it’s the same place.

This is an excellent example why I want to emulate The Sword: it instructs on playing out the character BITs for rewards.

I suspect there will be players coming in with lots of experience from many systems, and I want to quickly introduce them to BIGs and earning checks for camp, and handling the Grind. So, having such strong competing Beliefs is such a valuable part of The Sword, that’s what I loved most when playing it years ago.

I’ve been looking at Dread Crypt of Skogenby and Lost Crown of Tesh Naga for comparative ideas, but it appears from neither of those will the players gain a compelling reason to prevent something being taken, nor prevent a fellow adventurer having the findings. Skogenby has the soft compulsion to not steal from the disturbed dead, and Tesh-Naga suggests the crown should not be given to anyone for actual use, yet players could easily feel from a single-shot that consequences won’t matter.

That, in fact, may be true, and won’t deter from learning the system; however, I’d like to drive compelling BIGs into the pre-gens regardless. Burning Wheel’s Beliefs are more goal-oriented, where MG and TB have Beliefs which are more behavior-oriented with Goals that are short-term effort-oriented.

If you were revising the Beliefs of the pre-gens from The Sword into Torchbearer, would you place those into the Beliefs or Goals of any pre-gens for TB?

I feel the Goals are the place to inject that, such that during a mid-delve camp, they might use Persuade/Manipulate to influence one another toward other Goals in the following Adventure Phase.

It could still work in the Belief, but using Persuade/Manipulate toward another player may induce a frustration of trying to write a new Belief without much sense for who-is-this-character. So, I think changing a goal after camp is simply an easier choice for players.

Then, I’d recommend to make lists for each pre-gen of a belief and goal working together in combination. Then, let the players pick from the list or make something equally suitable. If the motivation for the B & G comes from the player it might help stoke that interpersonal tension.