The Practicalities of Fighting God?

The time has come for my players to attempt to strike down the god of death, who now roams the earth. I used the Monster Burner to stat up this giant (mostly white shade) skeletal hand, but now comes the question of how the fight should actually work. Here’s a basic outline of both sides

Thumyx, God of Death
Stats: Will W10, Perception W8, Agility G6, Speed G6, Power W8, Forte W10
I also tweaked the way white PTGS is calculated to be broken up by the Forte exponent instead of double, so Su G4, Li G14, Mi W8
Traits: Gigantic, Skeletal Hand, Floating, Celestial Sight, Death Hungry
Access to millions of dead bodies, the fight will happen in the wreckage of the largest city in the setting
I have no idea in terms of attacks, or if it should have extra defenses, or anything like that

Raiquen, the Mercenary
Power G7(buffed to G10), temporary Forte G(or W?) 6/7 from a deal with a minor deity
G9 Polearm, and a gray weapon. Also +3 to anything (probably power) from art magic
He can do a W8 wound if he buffs his strength and hits a superb. Funny enough, white shade doesn’t push that any higher
Magic ring that prevents one wound of any magnitude
One resurrection from a mortal wound (from selling his soul)
Enough artha for aristea +3 fate

Madelaine, the Demon
The demon statblock from the Monster Burner, not meant to harm god, mostly to be a distraction and able to fly

How do I balance this? How does god hurt people? What kinds of wounds does god do? I feel like this can end up a steamroll either way, and I’m not sure how to make sure it’s interesting.

How do I balance this? How does god hurt people? What kinds of wounds does god do? I feel like this can end up a steamroll either way, and I’m not sure how to make sure it’s interesting.

For me, the answers come from your world’s metaphysics.

At one end of the scale, a god is inviolate in their own area, so the god of death cannot die in the same way a broken vase remains a broken vase even if you break the bits again. In this instance, how the god interacts with the world will be entirely filtered through the concept of death in your world. For example, in modern Western society, death sits between an Abrahamic moment of judgement and a total cessation of all awareness and form with some regional/social flavours, so a modern Western “god of death” might harm someone by facing them with a barrage of moral dilemmas that take away senses if the target falters or doubts; thus, if the target survives the battle, they might come out of it with some of their senses absent or their morals shaken.

At the other end of the scale, a god is an immensely powerful being that is fulfilling a role, so the current god of death can be killed in the same way that the Queen of England can be killed but another god of death replaces them. This is likely to play out as a more traditional fight with a bit of grimdark flavour-text.

Looking at how you describe the player characters, laden with carefully gathered Grey and White and high dice pools, you’ve already told your player this is going to be a best-weapon-wins slug-fest rather than something more abstruse, so layering in some of the more characterful weirdness such as “kings and paupers are equal before death, so grey and white scale attacks are only as effective as black” might cause justifiable irritation.

You could potentially still have fun with death being the ultimate commonality of all things rather than exceptional: how about, using Artha causes the user wounds because death is the end of striving, belief, and growth; the players still get to pull the powerful stuff, but they need to balance the advantage of extra dice, rerolls, &c. for this action vs. being worse off after they’ve done it.

@Gnosego, I don’t want gods to look like big humans, and it was the first thing I came up with

@DaveHiggins, I like where your head is at. Fortunately, we’ve sorted out (with some very high wise and research rolls) what happens when gods are “killed”. Mortal beings obviously can never hit a god’s mortal wound, but once a deity is incapacitated, the next most suited (or prepared) will come in and do the finishing blow. Once god is dead, a minor god, in this case, the god of death by misadventrue, will ascend and become the new chief deity. This has happened once before, when the god of the land was killed, leading to the flooded world of our setting. The characters cut a deal with the runner up to help with the fight, costing only Raiquen’s eternal afterlife.

And I definitely don’t want to strip away the power of their grey shades, they’ve made their sacrifices in character creation and worked really hard for their equipment and earned traits. But I also don’t want to make this just a numbers thing, though the numbers are going to be tough. I might make it actually a fight on two fronts. I could do something along the lines of “if you want to fight Thumyx while on the ground, it automatically wins position at missile, but you can substitute the demon’s speed for yours if she’s carrying you in the air” Maybe a physical action test to climb on its back shadow of the colossus style? And then on the ground, massive hordes of the risen dead, which can all be killed in one hit by a gray weapon, but are dangerous through helping dice?

Does the GoD have Hands of Stone or the equivalent? Or a white shade weapon?

I guess there would need to be a trait for that, huh. And I don’t know. I’m thinking some smashing-type attacks that would do gray damage, and some kind of death ray that would do white damage. I’m still trying to figure out how to calibrate that though. I’ll have to look at their new PTGSs and work from there I think

If you want to go really ick on death attacks, how about not taking certain bacteria/viruses; the human immune system kills invaders, but what if it can’t?

Stat-wise, you can stick whatever numbers balance for your group, but describe it in terms of disease.

To shift the fight away from simple slug-fest, you could even have the power go off as the players arrive, washing over them with no immediate effect but dooming them to nigh-incurable sickness in the mid- to long-term, then have your god offer to reverse it if they submit. That way the players have a choice between potentially winning but having to cure themselves or abandoning their fight; after all, the replacement god might not be able to just reverse it, or might decide it’s a good thing if mortals who have turned godslayer don’t survive and claim they can’t.

To hit them in the BITs even harder, is there a way you can make one player want to do hardcore stabby Death to Death Itself! and the other have reasons to negotiate? Any terminally ill children or beloved ageing relatives? What about the best magician/warrior/&c. returned from death to tutor them?

Oh the disease thing is great! Knowing my players, they will be extremely happy to have a need for their frankly ridiculous stats, so I can bust out an Ob 6 or 7 or higher Forte test right at the start. And one of the NPCs they care most about is undead, so I’m sure I can do something with that. I think they’ve learned their lesson about DoWing god, and they’re probably not going to give up violence, but I can make em hurt with it.

OH MY GOD! I realized that I can make the summoner who brought god around, and died during the summoning TOTALY makes sense to be the enchanter’s weird magic father. I can force him to choose between learning about his own magical origins (he was painted, long story) and saving the world. I’m pretty sure I know how that will go, but the angst, it’s beautiful

Getting stabbed by a skeletal finger seems kinda great. Also, a hand has many bones. Do they have to stay assembled in a hand shape, or can they fly apart and each do something on their own? Does anything tie them together into a unit? Spirits? Does the God of Death have anything to do with spirits or ghosts? Because that could open up all kinds of interesting aspects. Like, if the God of Death “attacks” with the ghosts of dead orphan children who plead with the characters as opposed to just injuring them, that could maybe open up some kind of duel of wits to even approach within striking range of the God, maybe?

You gave me the idea of it shooting off its fingers as an attack, which I really like. I’m definitely gonna go the dead friends route, cause the mercenary’s deal is that his whole company got massacred by an evil wizard, and he’s got a lot of issues w that

That sounds like awesome Duel of Wits potential! The first challenge of killing Death? Convince your long-dead brothers in arms to let you do so! Could you imagine the Obfuscate bonus dice for having the ghost of your target’s loved one speaking on your behalf?

Oh, man. How great is it to think that anyone who comes to Death with malicious intent is confronted by everyone they’ve ever lost.

I’m running this today, I’ll give an update on how it went tomorrow, but y’all should see the legwork I’m putting into making this run smooth. No matter what sorcery/enchantment they do to their stats, I’ve calculated their possible PTGSs. I made a terrible mistake letting Art Magic buffs to Power/Forte affect the PTGS, but it’s far too late to walk that back. 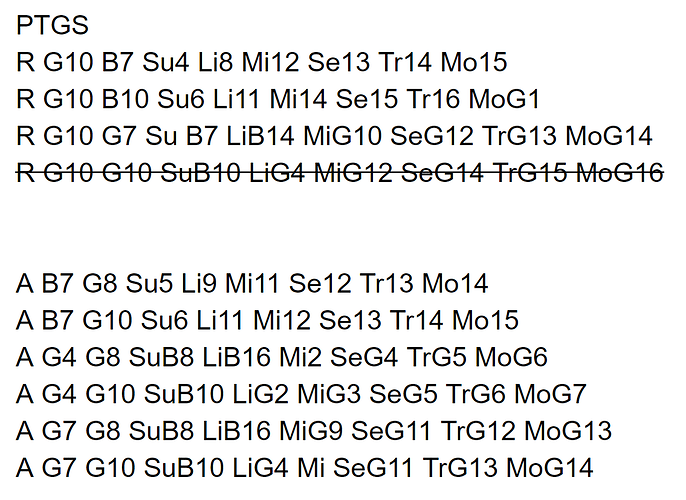 If the god does W-shade damage, it doesn’t seem like their spells will protect them.

That’s mostly correct, but they god will be using both magic attacks that do White damage and attacks with its bones and whatnot that do high gray damage. It does make a difference for those. It also makes it so I can skip them calculating their new ptgs during the session

It is done! The fight went perfectly. They spent a full half hour planning out their actions and counterplay, and it was worth it, they made exclusively correct plays. Just making good decisions wasn’t enough though, and they had phenomenal luck, and they just barely made it through without taking any damage (Besides a W1 hit, which was negated via magic item, and an automatic W16, which was undone via the earlier devil deal). Both of my players are all frazzled from the nerves, so I’m feeling pretty good about that. Thanks for the help!

Sounds like it was a banger of a session, mate! Well congratulations!

It was great fun, but I’m very excited to get back down to normal dice, instead of having to make fights interesting against people with G8 weapon skills lmao. Intrigue next!