I don’t own “The One Ring” RPG which came out recently but am intrigued by the beautiful dice which come with it, and their application to BW.

Here’s a shot of the custom d6s from TOR, showing all faces: 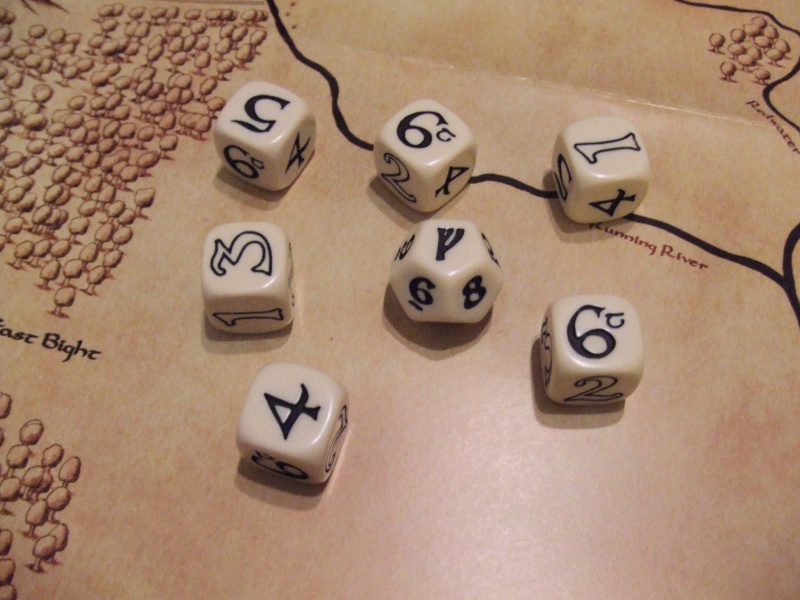 Note how the 1-3 are outline numbers, the 4-6 are filled in numbers, and the 6 has a runic symbol next to the number. That ties in with BW’s 1-3 = traitors, 4-6 = successes, and 6s can explode in the right circumstances. These TOR dice would be PERFECT for burning wheel !! The only drawback is that they are only “black shade” but who cares - you could easily fill in the white 3 to make some “grey” shade dice, plus the white 2 to make some “white” shade dice. You would need a fair few sets to do that though, and it would be a pain keeping the different ones separate.

What do you think? I believe these dice are available separately from TOR so you would not need to buy TOR to use them for BW.

That is an amazing discovery!

I have to say, I don’t think it’s a coincidence that the dice work so well. I feel like 60% of TOR is lifted from Mouse Guard (or perhaps Realm Guard), with influence from D&D, Savage Worlds, and some original ideas too. I posted a longer review of the game on another forum. Here are the relevant parts:

[…]the game seems to take a lot from Mouse Guard, in particular the Realm Guard hack (in which you play middle earth rangers a la Strider), without giving any credit whatsoever. I flip through my copy of Burning Wheel Gold and see its 2 pages of credits and thanks at the front and a bibliography at the back including books, games, and other media that influenced it. Then I read my pdf of Apocalypse World and see it has a 3-page ludography including thanks and credits WITH SPECIFICS for which mechanics were influenced by which games. I can’t help but feeling like this should be the standard. The One Ring’s quarter-page of credits sharing space with the publishing info and listing precisely ten names just seems rude and disrespectful.

And overall the game takes so much from Mouse Guard and Burning Wheel that I feel like it’s really a travesty that it wasn’t cited or referenced in any way. Some examples: -wises, called -Lores in TOR; the conditions weary, miserable, wounded instead of tired, angry and injured; advancing skills by using them; having skills rooted in certain stats, not that that’s exclusive to those games; the GM’s turn/players’ turn cycle; earning points that can be spent during the players’ turn; your rating in a skill is how many d6’s you roll; using traits to call for a chance to test where normally you could not - Mouse guard uses instincts for this; the influence of the seasons; there is a corruption track and as you progress you gain negative traits and when you reach the end the character is removed from play.

FWIW, the designer said he’d never seen Mouse Guard (though many of the playtesters had). And none of the Mouse Guard mechanics are particularly unique and innovative on their own, in fact Mouse Guard owes a huge spiritual debt to Pendragon. However, I had neither played nor read Pendragon before writing Mouse Guard.

Heck, why not use MG dice. They are perfect for Black shade dice for BWG.

I have to say, Pendragon is one of my old favourite games [especially the RQ Hack] and now BWG/MG has taken the lead. I’m still playing Pendragon, and itching to get BW back on the regular schedule. I will have to check out Realm Guard and see how it handles LOTR.

does anybody know where to buy them online? I think they look really nice.

Heck, why not use MG dice.

1s are often significant in BW, primarily for armor tests.

It looks like you have to splurge on the TOR game to get them. I looked on eBay, Miniatures Market, Troll and Toad, etc.

does anybody know where to buy them online? I think they look really nice.

Germany only, last I heard.

1s are often significant in BW, primarily for armor tests.

When we first played BW, the GM had re-inked some dice for us. This is what I’m planning to do with some MG dice once I get a couple sets.

Unfortunately I’m old enough to remember the day where you had to ink the dice for your games yourself. Often they came with a wax crayon included with the dice. I still have some of those original dice in my desk draw, slowly crumbling to dust.

You can buy the dice on their own from amazon.de here: