We started based on a tweet-length Situation about a shoeless peasant caught in a war with Bina Janos and played until that was resolved.

Now there is a playlist if you want to watch the youtube videos and here is a podcast, the first ten episodes are that campaign’s Book 1.

Now we’re on to Book 2 with a new Dwarven character. Here’s the youtube playlist. We’re two episodes in and it has been really fun, a very different character. We’ll play again a week from tomorrow. I’ll post up a link the day before. 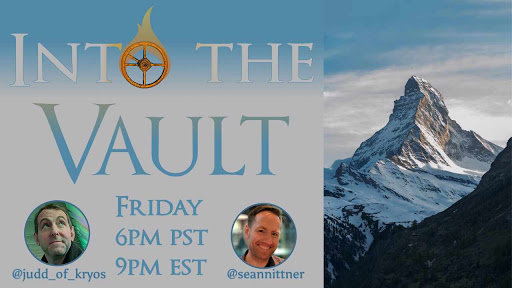 I loved listening to Bina Janos punching way above her weight class. And the format was amazingly punchy.

It also gave me insight into Burning Wheel play. While I’ve played campaigns of BE and Torchbearer, I’ve never played more than one shot of Burning Wheel and your series was really accessible and showed how it can drive very different kinds of story.

So yeah, I’m excited to listen to more.

Thank you for listening and for the kind words.

Bina was a risky character. I wasn’t sure it was going to work but Sean played her with a player fearlessness and we managed to find failure results that were meaningful when the dice hit the table.

I’ve just slammed through the podcast edition of “The Shoeless Peasant” in the few days since you posted, and that was a thing of beauty.

I loved hearing @Sean_Nittner just keeping pushing the character, and really appreciated @Judd taking the time to reflect back to both the player and character the impact of their actions.

That’s all definitely going to be feeding into my GMing style!

There are a few legendary campaigns I will never forget. I can’t rate them because how would you even find metrics for that, but there are certain games that speak truth to me, that challenge me as player, and reward me with such fond memories I will never forget. This was one of those rare games. Thank you @Judd for going on this magical journey with me. I’m so glad we’ve started another chapter of the story!

I am listening to the episode when Bina is working as a serving girl.

So much inspiration for me and fun to listen to.

Thanks to you both, Sean_Nittner and Judd!

I’m glad you are liking it. Thank you so much for listening. If you have any questions or comments feel free to leave them here.

We’ll be on with Book 2’s new character, Pellara on Friday.

We’re tweeting about beliefs and instincts as the game shifts gears at this link.

Indeed she is a grown woman. I did not mean to make her young.

Also I loved the part with the dwarf who replied after Bina asked, " are you still bold?"
“I lost a rune and now I am just old”
It is ep 5:1

May I add a rune and say this is “gold”

Thank you. We played last Friday and the game really heated up. Pellara declared herself Prince of the Vault, giant spiders are ravaging the human’s lands to the south. I’m loving it and writing notes about the princes of the neighboring holdfasts…

How are you adjudicating the off-screen, big picture stuff, Judd?

I had named all of the holdfasts on the original map, so I’m riffing off those names and figuring out who the prince is from there.

Drunk Uncle : this is the first holdfast, named because the mountain leans in one direction. Some call it the Leaning Uncle. This prince is old and wise but stuck in the old ways, refusing to change.

The Jewel Womb : a rich holdfast with an amazing bounty of jewels in its mines but the noble family is owned by the Guilders due to debt. This prince inherited debt to the Guilders and has to get permission from them to do anything of importance.

Wheeholdt : the mountain where the holy relic, the Burning Wheel sits atop, burning like a beacon until the arch-mage arrives to claim it. This prince is kind and giving but also cautious, not wanting to risk their holy charge.

Orchaunt , was once Runehall before it fell: this prince is an adventurer, claiming to be descending from the long dead nobles of Runehall; she wants to reclaim her ancestral hall, classic trope.

The Dreaming Palace : a holdfast that closed its doors centuries ago and never reopened them. None know what is within.

The Vault : is a library holdfast and is where the player in the game currently lives. There was a dragon squatting here…spiders ate it…long story

And I similarly riff!

Just wanted to mention I am still enjoying the adventure of Bina. She is on her way back to the village.

You guys explain your thoughts around the decisions in the game mechanics in an educational and interesting way. I really like that.

Again, makes me want to play Burning wheel really bad. An I will, soon.

Just wanted to say I too am listening to the adventures of Bina, and really enjoying them.

Thank you so much for the kind words. We’ll be streaming in about an hour if you’d like to stop by.

I don’t know if I’ve said this on Twitter, or if it’s something that I’ve thought and just never actually articulated, but one of my favorite things that you do in the Bina campaign, Judd, is to challenge Bina’s Beliefs by having NPCs acknowledge how much she’s actually accomplished, and then basically pressuring her to take a step further. You’ve basically challenged present Bina with past Bina, and it’s wonderful.

Thank you, Shaun. I hadn’t found words to describe the technique I used to challenge Bina’s beliefs. That is a really interesting way to put it.

She was such a unique player-character, it makes sense that in trying to figure out how to challenge her heroism I had to try something different.

Thanks, naming those tools like that is a huge help.

Pellara was an interesting character. Could be that 9 sessions isn’t long enough to see Greed really play out. In some ways Sean got a ton of Greed dice without having to deal with concrete consequences but we played it in a cool way.

Looking forward to starting the third book of this campaign, playing Bina’s daughter, Nara. Bina had to fight and claw for every successful roll. Pellara maybe had too many successful rolls because Greed is such a powerful Emotional Attribute. Nara should be a really interesting middle ground as a wizard with Art Magic.

I wrote a blog post about starting up Book 3 here.

2 Likes
From Pellara to Nara
next page →