Land-living robber crabs scour the earth in search of tasty morsels to eat. The ten-legged crustacean averages in size to that of a small dog and may appear in vibrant blue and red colors. They prefer fleshy fruits but also savor the hatchlings of raided nests or the carcasses of caron. When attacking their next meal, robber crabs–being able to safely fall from the treetops–will descend upon unsuspecting prey. Unlike solitary hermit crabs, a cast of robber crabs live in found habitats, such as unlocked treasure chests, in familial groups of up to ten.

Type: Beast
Instinct: Always seize an opportunity to get ahead.

8 more and we can release a Decalog of Decapods. 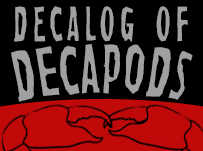