Sources for all Spells

For my own use I’m assembling a complete spell reference. I’ve got the Torchbearer Rulebook, Middarmark, the playtest spells and prayers, and Wanderers, Outcasts, and Exiles. Is there any other source of spells for Torchbearer?

Also, there’s the Raise Dead prayer in the Terrible Price playtest that I don’t think is elsewhere.

Of course! Thanks for reminding me. I think my next PC will be a fisk gambler!

Also, there’s the Raise Dead prayer in the Terrible Price playtest that I don’t think is elsewhere.

Alas, it is but a name. Perhaps Thor will see our plight and bestow the text upon us?

The Terrible Price document is on the Torchbearer blog: 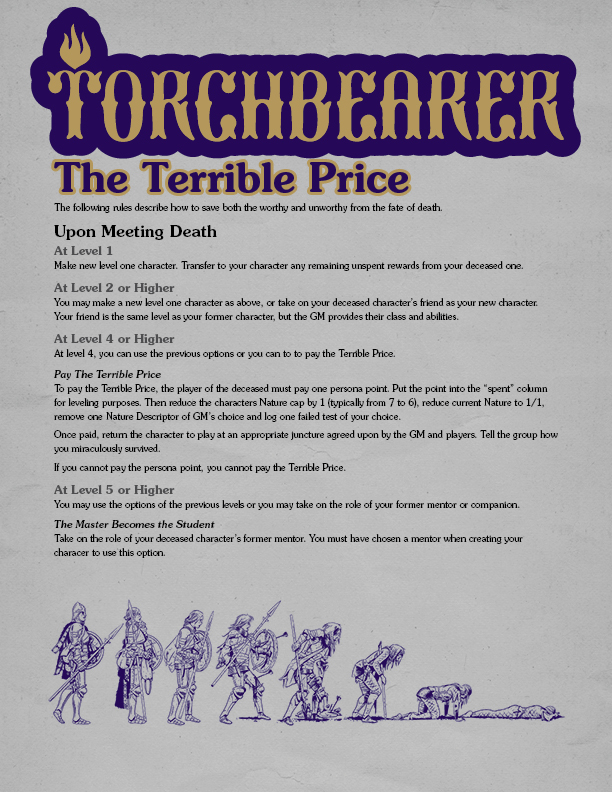 Would You Pay the Terrible Price?

If you're playing Torchbearer, characters are almost certainly going to die. That's the nature of the beast. But what then? By default, you start a new character at level 1. I'm a fan of that myself. But there are alternatives! Some of you have...

Astral Knights has some spell-like abilities, if you want to include that. Otherwise, I don’t think you’ve missed anything.

Oh, wait. Stone Dragon Mountain has a prayer. Kind of specific to the place, though.

I wrote up a “raise dead” spell. It works differently than the rules given in the Terrible Price, mainly because I feel Nature is a better measure of spiritual force than Health.

Intercession of the Lords of Life and Death Effect
Invoking this prayer taxes the cleric’s current Nature by one. The prayer only works on a reasonably complete set of remains (e.g. missing an arm is possible, missing a head is not). Intercession requires a ritual space without interruption, and so may only be cast in the Camp or Town Phase. Unlike other prayers, Intercession requires a Check or a Lifestyle increase to invoke.

After a lengthy ritual, the subject is restored to life. If unable to pay the these costs, the subject cannot be revived:

Lots o’ Loot has Tillius’ 10 Useful Spells, which again are incomplete. But they’re so simple. My only question is would they have an Ob 1 for learning, scribing, and casting; or would there be no test for casting.

Blessed Bargain and Frugal Concern use Margin of Success (or Failure in the case of the former).